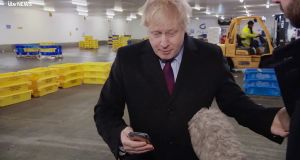 British prime minister Boris Johnson looks at the photograph on ITV reporter Joe Pike’s phone of four-year-old Jack Williment-Barr lying on the floor of the emergency department at Leeds General Hospital, after initially refusing to look at it. Screen grab: ITV/PA Wire

Britain’s prime minister Boris Johnson has faced accusations that he is uncaring after he refused to look at a photograph of a four-year-old boy forced to sleep on the floor of an overcrowded hospital emergency department. Questioned about the incident during a visit to Grimsby, Mr Johnson took ITV reporter Joe Pike’s phone and put it in his pocket rather than look at the picture.

The photograph, first published by the Daily Mirror, showed Jack Williment-Barr, who was thought to have pneumonia, lying on a pile of coats on the floor at Leeds General Hospital with an oxygen mask at his side because all beds were occupied.

When Mr Pike challenged the prime minister about pocketing his phone, Mr Johnson took it out and looked at the photograph.

“It’s a terrible, terrible photo, and I apologise, obviously, to the family and all of those who have terrible experiences in the NHS. But what we are doing is supporting the NHS and on the whole, I think patients in the NHS have a much, much better experience than this poor kid has had,” he said.

Labour’s shadow health secretary John Ashworth said the prime minister’s response showed that he was uncaring and that he could not be trusted with Britain’s National Health Service (NHS).

“Refusing to even look at an image of a child suffering because of Conservative cuts to the NHS is a new low for Boris Johnson. It’s clear he could not care less. Don’t give this disgrace of a man five more years of driving our NHS into the ground. Sick toddlers like Jack deserve so much better,” he said.

Liberal Democrat welfare spokesman Tim Farron said it was unacceptable that a hospital did not have enough beds to accommodate a sick four-year-old but that the prime minister clearly did not care.

“This is the moment the mask slipped. When confronted with the human impact of his government’s failure to properly fund our NHS, Boris Johnson chose to look away. This shocking lack of empathy shows why Johnson is not fit be prime minister. He simply doesn’t care about patients or their families being catastrophically let down by this Conservative government,” he said.

A new poll by ICM on Monday showed the Conservative lead over Labour shrinking to six points, a margin narrow enough to make a hung parliament likely. But most other polls give the Conservatives a bigger lead and a YouGov poll in Wales suggested that the party could gain eight seats there, with Labour losing eight.

During the closing days of the campaign, Mr Johnson is targeting Labour-held seats in England and Wales which voted Leave in 2016. Jeremy Corbyn is focusing on shoring up support in Labour-held seats, but shadow chancellor John McDonnell said on Monday that the party remains confident of victory.

He said he believed the DUP would support a minority Labour government but ruled out any coalitions, pacts or deals.

“It will be up to other parties to actually take their decision on what aspects of that programme they’ll support and those that they don’t,” he said.