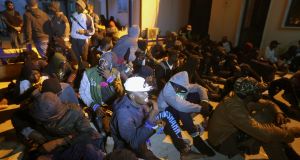 Migrants sit on the floor at a detention centre in Libya’s Tajoura. Among those sheltering in the GDF are hundreds of survivors of the July Tajoura detention centre bombing, in which at least 53 refugees and migrants were killed. Photograph: Mahmud Turkia/AFP via Getty Images

Until the middle of this year, long-suffering refugees in war-torn Libya called the UN Refugee Agency’s gathering and departure facility (GDF) in Tripoli the “hotel” because it was the best place they had been in years.

“Water, food, everything is available,” extolled a Sudanese man in his early 20s, who stayed there at the beginning of 2019 and is now in Sweden. “It’s not a hotel but people call it a hotel because they find it suitable for living.

“Dear, when you leave a detention centre maybe you’ll call it paradise,” he said, referring to the government-aligned detention centres in which human rights abuses are regularly documented.

In the past week, more than 100 refugees and asylum seekers have agreed to leave the facility after UNHCR staff said they will withdraw food and refuse to process evacuation cases for anyone left inside.

Many of those inside the GDF have already tried to get to Europe, but were intercepted on the Mediterranean Sea by the EU-supported Libyan coast guard. Initially, the GDF was supposed to be an alternative to the detention centres roughly 6,000 are locked up in, where diseases and abuse are rife, and some refugees go months or years without seeing sunlight.

The GDF was opened to much fanfare one year ago. It was funded by the EU to the tune of €2.1 million and was supposed to have capacity to protect 1,000 refugees. Over the past few months, though, UNHCR staff say the capacity has dropped to 600 and it is severely overcrowded.

UNHCR staff say they have become unable to manage it and food provision will stop by the end of December. Among those sheltering in the GDF are hundreds of survivors of the July Tajoura detention centre bombing, in which at least 53 refugees and migrants were killed, though witnesses say the real death toll was much higher.

Refugees say they will be in danger if made fend for themselves in Tripoli. Some haven’t been outside or alone in years, and risk being kidnapped again by traffickers or exploited by militants, they say.

“Conditions in Libya remain extremely challenging and fighting is intensifying,” said Charlie Yaxley, a UNHCR spokesman, in an email to The Irish Times. “This has impacted everybody inside the country, including ordinary Libyan civilians, some 600,000 foreign workers, around 40,000 refugees and asylum-seekers, as well as our own staff. Despite these significant challenges, we remain committed to providing assistance to refugees in Libya.”

“The situation in recent weeks has drastically changed in the GDF due to overcrowding,” he said. “The protection concerns that have arisen as a result has led to us to reassess our role and to strengthen our assistance in urban areas.”