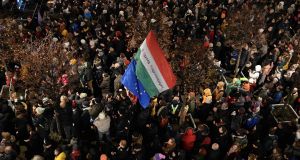 Thousands of Hungarians have protested against a plan to tighten government control over theatres, which they see as part of prime minister Viktor Orban’s drive to dominate the nation’s political, economic and cultural life.

Actors and directors led Monday evening’s rally in Budapest against a bill that they say threatens artistic freedom and extends the nationalist government’s reach into areas that should be politically independent. The city’s liberal opposition mayor Gergely Karacsony also addressed the crowd.

A Hungarian parliament controlled by Mr Orban’s Fidesz party could vote as soon as Wednesday on a bill to establish a national cultural council to determine “the unified strategic direction of various segments of culture”.

As part of the government’s vision for creative institutions that “actively defend the interests of the nation’s wellbeing and development”, the minister who oversees culture would play a role in appointing directors to theatres that receive state funding.

The final bill is somewhat softer than a draft that outraged leading Hungarian cultural figures last week, and prompted them to launch an online petition against the reform, which by Monday evening had garnered more than 49,000 signatures.

“They are trying to set up a regime according to which...everyone who gets a chance to make culture and create work would have to be a loyal servant of the regime,” Robert Alfoldi, an actor and former director of the Hungarian national theatre, said during a discussion of the proposals.

“I think the matter of appointing directors for theatres is an indirect way of censorship,” added director Martin Boross. “So instead of scanning scripts or censoring pieces, they make it easier to put someone in position that will create art that aligns with their visions and world view.”

In a video posted online with directors and fellow performers on Monday, actor Judit Pogany said: “I was already an actor in the [communist] 1960s, 1970s and 1980s. I never thought that after 30 years of democracy, I’d start feeling the way I did back then.”

The anti-immigration and Eurosceptic Mr Orban has said he wants to make Hungary an “illiberal democracy” and to “embed the political system in a cultural era”.

The final bill offered some reassurance to critics, however, by stating that the government and local councils must “guarantee” the artistic freedom of theatres and by removing draft proposals to overhaul state financing for culture.

A recent sexual harassment scandal at a Budapest theatre prompted the government to demand a greater say in how state-funded cultural institutions are run.

Since taking power in 2010, Mr Orban has expanded government influence over everything from business and the media to scientific research and the justice system in Hungary, alarming the EU and prompting the renowned Central European University to move most of its courses to Vienna this year.