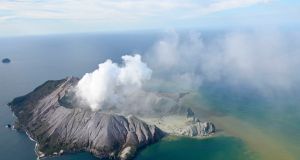 Five people have died and eight are still missing following an eruption on a volcanic island in New Zealand, according to prime minister Jacinda Ardern.

She said that New Zealanders and tourists from Australia, the US, Britain, China and Malaysia were among the missing and injured. New Zealand police do not expect to find any more survivors on White Island, where two explosions in quick succession sent up a huge plume of ash that could be seen from the North Island.

Some 31 people remain in hospital after three people were discharged overnight. In total, 47 people visited the island on Monday.

Ms Ardern praised the efforts of first responders, including several helicopters that rescued people from the island. “All of us would want to acknowledge the efforts they went to ensure that everyone who could be evacuated was,” said Ms Ardern.

Every year thousands of tourists take boat trips and helicopter tours to view the White Island’s dramatic landscape. Some have questioned whether the privately owned island, which is New Zealand’s most active cone volcano, should have been operating as a tourist destination. The Maori name of the island is Whakaari.

Raymond Cas, emeritus professor at Melbourne’s Monash University’s school of earth, atmosphere and environment, said it was “a disaster waiting to happen”.

“Having visited it twice, I have always felt that it was too dangerous to allow the daily tour groups that visit the uninhabited island volcano by boat and helicopter,” he told the Australian Science Media Centre.

Ms Ardern said that the island had operated as a tourist site for decades, but added: “It is a very unpredictable volcano. There will be questions that will be asked and do need to be answered by the appropriate authorities.”

A camera run by Geological hazard trackers GeoNet, which takes pictures of the site every 10 minutes, showed a group of people visiting the crater at 2.10pm. The next shot, taken at 2.20pm, was completely distorted by the blast.

Up to 50 people, including more than 20 Australian tourists, were on or near the island at the time of the eruption, which happened at 2.11pm on Monday, during busy tourist season. Some 23 people managed to escape.

Rescue helicopters carried out several reconnaissance flights over the island on Monday but reported “no signs of life have been seen at any point”, said police.

“Police believe that anyone who could have been taken from the island alive was rescued at the time of the evacuation,” they added.

Australian prime minister Scott Morrison confirmed that Australians were among those visiting the island. “We are working to determine their wellbeing,” he said.

All of the 23 people rescued had sustained injuries, mostly burns, said police and seven people who were in a critical condition had been flown to hospitals in Tauranga and Auckland.

Michael Schade, who was visiting the island with his parents, had stood at the crater just 20 minutes before the eruption. He was among a boatload of tourists just off the White Island that witnessed the disaster, and which returned to rescue a crowd of people on the jetty.

“Some people had pockets of burns, other people were fine, and others were really rough,” said Mr Schade on Monday. Some were screaming, while others were in silent shock, he added.

Passengers set up an assembly line to pass water bottles to people with burns, as well as jackets, inhalers and eye drops.

Unstable conditions, toxic gases and ash fall prevented rescue teams from searching the island – which lies 48km (30 miles) from the east coast of New Zealand’s North Island, in the Bay of Plenty – on foot.

Kevin O’Sullivan, the chief executive officer of the New Zealand Cruise Association, said a tour party of 30 to 38 people from the Ovation of the Seas had been touring White Island when the eruption took place, and the party had not returned. Their names and nationalities were being given to the police, he said. The ship would remain in Tauranga port at least overnight.

Royal Caribbean, which owns the Ovation of the Seas, asked for prayers to be said for all involved.

New Zealand Red Cross has created a Family Links webpage, where families can register the names of missing relatives and where people can list that they are safe.

A pilot and four passengers whose damaged helicopter was shown in footage taken after the eruption were unharmed, it was confirmed. The helicopter belonged to Volcanic Air, a tour company based in Rotorua, which said the crew had been returned to the mainland via boat.

About 10,000 tourists a year visit the island, which was bought by George Raymond Buttle, an Auckland stockbroker, in 1936. It is now owned by the Buttle Family Trust.

The island last experienced a short-lived eruption in 2016, in which no one was hurt. GeoNet raised the alert level for the White Island in November after noting an increase in volcanic activity, from one to two on a scale where five represents a major eruption. – Guardian