Party leaders back on the campaign trail 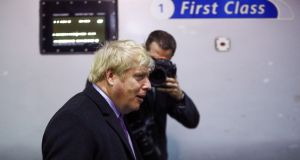 Throughout the campaign, Boris Johnson has portrayed his government as a new one, as opposed to the Conservatives seeking a fourth term in office. Photograph: Hannah McKay/Getty Images

It’s a week to Election Day.

After a two-day lull for the Nato summit, the party leaders are all back on the road today as the campaign enters its final week. As I report here Donald Trump stomped off in a huff without giving a final press conference after other leaders were caught on video mocking him.

Boris Johnson was part of the group but Canada’s Justin Trudeau caught the flak, with Trump describing him as “two-faced” (although he also said he was “a nice guy”). For Johnson, the summit was a success insofar as he avoided Trump’s embrace in public and the US president stayed on message about the NHS not being part of a trade deal.

The prime minister last night plunged back into the campaign, promising a sweeping legislative programme during the first 100 days of a Conservative government. As I report here, the withdrawal agreement Bill would return to Westminster before Christmas and Britain’s exit from the EU on January 31st would be followed by a tax-cutting budget and a new law guaranteeing more funding for the NHS (although foreigners would be charged more for using it).

There would be tough new sentencing policies for violent criminals, a comprehensive review of foreign, defence and security policy and a new immigration policy.

Throughout the campaign, Johnson has portrayed his government as a new one, as opposed to the Conservatives seeking a fourth term in office. He has dodged questions about his party’s unpopular record in office by arguing that he was mayor of London for eight years until 2016, implying that he has no responsibility for Conservative austerity policies.

But he returned to Westminster as an MP in the 2015 general election and voted for George Osborne’s budget that year, which slashed social welfare budgets. Johnson also backed the deep cuts to local authority budgets that have left threadbare many of the services poorer people depend on.

Jo Swinson has faced difficult questions about her record in the Conservative-Liberal Democrat coalition between 2010 and 2015 and in an interview with Andrew Neil last night she apologised for some of the harshest austerity measures. There’s no chance that Johnson will take responsibility for his role in the misery caused by austerity and he has faced no pressure to do so from the media, which are more interested in the burning question of whether Jeremy Corbyn watches the queen on television on Christmas Day.

Gerry Moriarty on the SDLP’s manifesto launch in Derry.

James Forsyth in the Spectator says the Tories are right to be nervous.

Martin Fletcher in the New Statesman on Jo Swinson’s woes.

Martin Kettle in the Guardian says all is not lost for the Liberal Democrats.

“We don’t believe it’s enough to offer people a hand up out of poverty. We want to abolish poverty” - Labour’s shadow chancellor John McDonnell.

8pm Jeremy Corbyn speaks at a rally in Birmingham