Half-baked UK election campaign is all whoppers and codswallop 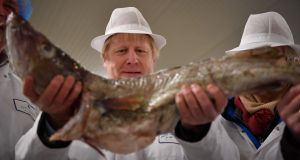 The indications are that in the side-league of election-riffing brand campaigning, Burger King has emerged the victor

Not everybody was willing to applaud the genius. “All Brexit supporters must now boycott Burger King”, tweeted one disgruntled UKIP enthusiast, in tacit acknowledgement that the particular “whopper” invoked by the ad is Vote Leave’s debunked 2016 referendum bus message that Brexit would result in an extra £350 million (€416 million) a week for the National Health Service.

Admittedly, there are still a few days to go, but the indications are that in the side-league of election-riffing brand campaigning, Burger King has emerged the victor. Other burgers are available. And, as ever, it’s worth keeping an eye on what KFC gets up to in the run up to the vote.

In something of a crisis PR lesson for all companies in need of one, KFC and its creative agency Mother not so long ago devised one of the all-time great apologies. After a supply hiccup saw the fast food chain run out of chicken and close hundreds of outlets for several days, it published a full-page newspaper mea culpa with the letters “FCK” and the droll admission that a chicken restaurant without any chicken was “not ideal”.

This came after it emerged that logistics giant DHL, which KFC had blamed for its chicken shortage, would be tasked with importing medical supplies to Britain if the UK left the European Union without a deal. DHL said it had “an inherent understanding” of how to manage the health service contract.

Burger King gets political in the run-up to the U.K. election with a 'Whopper on the side of a bus' https://t.co/EpiQKteHZ9 pic.twitter.com/hTrkcVOdsL

Andrew Neil and some chickens waiting for Boris Johnson at Grimsby fish market this morning. pic.twitter.com/3AIRjjA3mO

Then in September, as Labour was busy resisting Johnson’s push for a general election, the Conservative Party took its cue from a dubious front page of The Sun and published a doctored picture of Labour leader Jeremy Corbyn in a chicken costume. Unwisely, it informed KFC online that it had “found an even bigger chicken than you”.

That this made no sense didn’t stop Conservative chairman James Cleverly from doubling down and tweeting: “Thinking about what to have for lunch. Large bucket of boneless (certainly spineless) JFC (Jeremy’s Frightened & Chicken) perhaps.”

KFC’s UK and Ireland Twitter account promptly garnered more than 10 times as many likes than the original Conservative tweet for its talk radio-citing reply: “This is KFC not LBC don’t @ me.”

Call it a Rorschach inkblot interpretation, but there’s a gluttonous quantity of food imagery in this winter election, driven not by the allotment-owning Corbyn but by Johnson, a man whose voracious appetites include a fondness for insisting that “his” Brexit deal – an old May deal, reheated – is “oven-ready”.

“Ding!” exclaimed @Conservatives over the image of an “oven-ready” lunchbox marked Boris’s Brexit Deal and the instruction to “stick this in the microwave”.

Confusingly, “oven-ready” and “microwaveable” mean the same thing in the universe from which this bogus meme came, allowing Liberal Democrat leader Jo Swinson to play the easy pedant card, observing that “if you put Tupperware in the oven, all you’ll get is a mess”.

Dispatched in almost every interview he deigns to give, Johnson’s whole #OvenReady line is more than just half-baked. It’s a patronising attempt to speak the imagined language of time-poor, ready-meal buying Leave voters.

That it is coming from the mouth of a political class that won’t ever be affected by any Brexit-triggered rise in food prices and has, thanks to years of austerity policies, overseen a proliferation of food bank usage in the UK, only makes it more distasteful.

You would also be hard-pressed to find a ready-meal manufacturer that thinks anything to do with Brexit is a healthy idea for its business, but right now this is somewhere down the swelling list of political ironies.

It’s not so long ago that Johnson held up a smoked kipper and wailed that the 21st century UK-EU kipper trade was being stifled by evil Brussels rules on the packaging of refrigerated goods. The European Commission drily shrugged that the food safety rules in question were “purely a UK national competence”, a choice sequence of words if ever there was one in 2019.

Still, Johnson continues to mix his deeply unpleasant anti-immigrant comments with some cheaply fired-off “oven-ready” election promises, sticking to the toxic recipe as he ices doughnuts in a London bakery and poses at a Grimsby fish market with nonplussed cod.

On Monday morning, a squad of anti-Boris protesters wearing BBC interviewer Andrew Neil face masks waited outside this fish market in the dark and held up pictures of chickens. Awkwardly unprepared to forget the prime minister’s refusal to submit to Neil’s tauntingly “oven-ready” interview, they booed him.

Alas, many turkeys remain inexorably drawn to the festive season, with polls indicating that British voters are disinclined to tell Johnson to get stuffed in sufficient numbers. Rearrange the letters “KFC” for an appropriate response.

1 Irish people like nothing more than being bribed with their own money
2 Being in Nama regarded as stigma in UK, O’Flynn tells court
3 Greencore investors urged to spurn Coveney’s €315,000 pension
4 Climate apathy in Northern Ireland could impact on the Republic
5 Hogan warns Britain on US trade deal as EU set to impose tariffs
6 EU considers five-year ban on facial recognition tech in public areas
7 Ministers ditch Davos for electorate’s doorsteps
8 The Irish economy is thriving but if you’re not feeling it – here’s why
9 GoMo is being investigated by advertising authority
10 Barclays to cut 100 senior roles as lender seeks to rein in costs
Real news has value SUBSCRIBE

Labour Court expected to rule on Paddy Power workers’ claim 13:37
Being in Nama regarded as stigma in UK, O’Flynn tells court 13:35
Irish people like nothing more than being bribed with their own money 12:52
Coveney launches inaugural Italian Irish Chamber of Commerce 11:43
Ministers ditch Davos for electorate’s doorsteps 11:19
Search executive
jobs on irishtimes.com