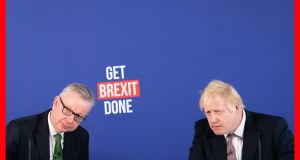 Since Boris Johnson called the general election three weeks ago, Brexit has occupied a vast, empty space in the centre of the campaign, pushing other issues to the periphery but subject to little meaningful debate itself.

The Conservatives speak briskly about “getting Brexit done” so they can address voters’ real priorities like health, education and crime. Labour promises a second referendum during which Jeremy Corbyn will remain neutral, and the Liberal Democrats want to cancel Brexit by revoking the article 50 notification.

Until this week, none of the parties had discussed what will happen after Brexit or the role Britain hopes to play in Europe if it decides to remain in the EU. But during the past few days, as polls pointed to a Conservative majority, we have caught a glimpse of how Johnson would approach the next phase of negotiations with the EU and the difficult choices he will face.

Labour’s publication of leaked documents from trade officials revealed much about what Donald Trump’s administration will be seeking in a post-Brexit trade deal with Britain. The issue of the National Health Service (NHS) received most attention, but what was most striking was Washington’s determination that London should not remain aligned with EU regulations and its preference for a no-deal Brexit.

In London on Friday, Johnson promised to abandon EU restrictions on state aid and public procurement after Britain leaves the bloc on January 31st next year. Complaining about the cumbersome nature of the EU state aid procedure, he said Britain would introduce its own rules to make it easier for the government to intervene quickly to support industries that run into trouble.

Under the withdrawal agreement Johnson negotiated with the EU, the new state aid regime would not apply to Northern Ireland, which would continue to abide by EU rules. So his plan would have the effect of thickening the economic border in the Irish Sea.

Meanwhile, new public procurement rules would be “geared towards supporting local business and promoting British business”. Both the state aid rules and the public procurement regime would comply with Britain’s obligations under the World Trade Organisation (WTO).

In the political declaration that accompanied the withdrawal agreement, however, Johnson agreed that Britain’s proximity to the EU meant that their future relationship “must ensure open and fair competition, encompassing robust commitments to ensure a level playing field”.

The two sides agreed to go beyond their WTO obligations and Michel Barnier has ruled out the “no tariffs, no quotas” trade deal Johnson seeks unless it also means “no dumping”. Dumping refers to unfair competition and EU member states will not agree to any deal that gives Britain access to the single market if its government is tipping the scales by subsidising British firms and giving local companies preferential treatment in public procurement.

When I asked Johnson on Friday why he was prepared to risk market access for the sake of these measures, he said they would be compatible with a level playing field and that any issues could be arbitrated in a joint committee. This solution is unacceptable to the EU, however, because if the committee cannot agree the issue gets stuck, a problem that has bedevilled the EU’s relationship with Switzerland.

Johnson spent much of his career as a journalist railing against the state interventionism that was part of Europe’s political culture and calling for Britain to shake off regulatory control. The measures he announced on Friday would make Britain more interventionist after Brexit than it is now, reflecting Johnson’s new, redistributive populism.

In an interview with the Spectator this week, he characterised Brexit not as the dash for economic freedom many of its right-wing architects long for but as a revolt against regional inequality.

It goes without saying that the levelling up Johnson describes is fully consistent with membership of the EU, which is partly responsible for many of the infrastructure projects that have benefited Britain’s poorest regions. And if Brexit makes Britain poorer, as most economists believe it will, its government will have less leeway for levelling up than if it had not chosen to leave.

Johnson’s electoral strategy of winning a majority by capturing dozens of traditionally Labour seats in the midlands and the north of England could place severe limits on his room for manoeuvre in trade talks with both the EU and the US.

Eurosceptic backbenchers, their numbers bolstered by new, hardline MPs, will seek to block any trade deal with the EU that involves meaningful level playing field commitments. But public opinion, especially in former Labour constituencies, will not allow Johnson to agree to US demands on food standards and drug patents and for US companies to provide more services to the NHS.

Caught between his backbench Brexiteers and the British public, Johnson could find himself in the worst of both worlds, with lower access to the EU market and no prospect of a trade deal with Trump.

1 German nudist chases wild boar that stole laptop at Berlin lake
2 Covid-19: One more death and 174 further cases confirmed in State
3 Garda checkpoints in Kildare, Laois and Offaly as restrictions come into force
4 Midlands lockdown Q&A: Firstly, is it a lockdown or not?
5 Meet the Bearman of Buncrana: ‘I knew about Joe Exotic for years’
Real news has value SUBSCRIBE