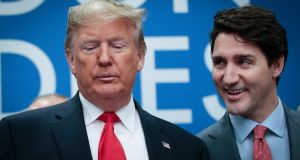 Nato leaders have agreed to work together to counter terrorism and China’s growing military power and to update their plan to defend Poland and the Baltic states from any threat from Russia. But the organisation’s 70th anniversary summit outside London was overshadowed by a row that saw Donald Trump describe Justin Trudeau as “two-faced” after the Canadian prime minister was caught on video appearing to mock him.

The summit was fraught with disputes, as Turkey’s Recep Tayyip Erdogan threatened to block the defence plan for Poland and the Baltic states unless his Nato allies agreed to classify the Kurdish YPG militia as a terrorist group. The militia fought alongside western forces in Syria against Islamic State and French president Emmanuel Macron said there was no consensus with Turkey on the issue.

“We do not agree to classify the YPG-PYD as a terrorist group,” he said.

“There have been disagreements in Nato for as long as the alliance has existed,” he said.  “The rhetoric is not always excellent – but the substance is perfect.”

Mr Stoltenberg said that member states had increased their defence budgets by $130 billion since 2016 as more countries approached Nato’s target of spending 2 per cent of GDP on defence. Mr Trump, who has long complained about other member states failing to pay their way, welcomed the increased spending.

The US president left the summit without holding a scheduled press conference after video emerged overnight showing Mr Trudeau at the centre of a group of leaders and dignitaries at a reception at Buckingham Palace on Tuesday evening.

“You just watched his team’s jaws drop to the floor,” Mr Trudeau said, a remark he said later referred to the US president’s announcement that the next Nato meeting would be held at Camp David outside Washington, DC.

Mr Trump hit back on Wednesday, claiming that the Canadian prime minister was gossiping about him because he had put pressure on Canada to spend more on defence.

Mr Johnson hinted that he would bow to pressure from the US to exclude Chinese telecoms firm Huawei from building Britain’s 5G mobile network. The US and Britain are part of the Five Eyes intelligence-sharing network that also includes Canada, Australia and New Zealand, but Washington has warned that it would reduce co-operation with any country that chooses Huawei.

“I don’t want this country to be unnecessarily hostile to investment from overseas. On the other hand, we cannot prejudice our vital national security interests, nor can we prejudice our ability to co-operate with other Five Eyes security partners, and that we will be how – that will be the key criterion that informs our decision about Huawei,” Mr Johnson said.