On surprise visit to Kabul, US president says he has reopened talks with the Taliban 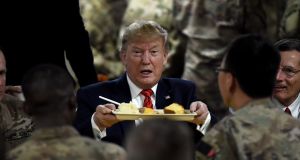 US president Donald Trump serves Thanksgiving dinner to US troops at Bagram air base during a surprise visit. Photograph: Olivier Douliery/AFP

Washington Correspondent US president Donald Trump said he has reopened talks with the Taliban, as he made a surprise visit to Afghanistan to meet US troops stationed in the country.

Mr Trump arrived in Kabul on Thursday for an announced visit to mark Thanksgiving, dishing out festive lunch to American military personnel based at Bagram air base, just outside the Afghan capital.

His comments suggest a shift in policy towards Afghanistan. He abruptly terminated discussions with the Taliban in September after floating an idea to invite the terrorist group to Camp David for peace talks, a suggestion opposed by several of his advisers. The peace negotiations, which had been ongoing for several months, were also halted after a terrorist attack which killed 12 people, including an American.

Mr Trump has long sought to pull the remaining US troops stationed in Afghanistan out of the country, but has so far failed to do so. About 14,000 US troops are based there.

The president, who had been spending Thanksgiving at his Mar-a-lago home in Florida, secretly flew to Joint Base Andrews outside Washington on Wednesday night, from where he took the 13-hour flight to Afghanistan on Air Force One.

Mr Trump addressed about 1,500 US troops in an aircraft hangar. “There is nowhere I’d rather celebrate this Thanksgiving than right here . . . with the toughest, strongest, best and bravest warriors on the face of the Earth,” he said.

“We’ve made tremendous progress and at the same time we’ve been drawing down our troops,” he added, though he said that US troops would remain in the country until a peace agreement was struck.

“We’re going to stay until such time as we have a deal, or we have total victory, and they want to make a deal very badly,” he said of the Taliban.

The visit took place a week after a prisoner swap which saw the Taliban release two western academics in exchange for the release of three Taliban commanders, a sign that revived negotiations were in the offing.

Mr Trump’s visit to the country – only his second to a combat zone since becoming president – came shortly after he pulled out US troops from northern Syria, paving the way for Turkey’s incursion into Kurdish-held areas of the country.

Foreign policy priorities are expected to feature at next week’s Nato leaders’ summit in Britain which will be attended by Mr Trump and secretary of state Mike Pompeo.

Amid ongoing tensions between the US and its co-members over contributions to the Nato budget, Nato secretary general Jens Stoltenberg said European members and Canada had increased their defence spending by 4.6 per cent in real terms in 2019.

“This is unprecedented progress and it is making Nato stronger,” he said ahead of the summit.