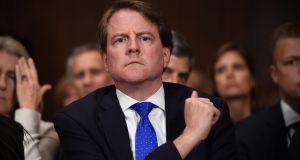 Former White House counsel Don McGahn is the subject of a court ruling that may impact the impeachment inquiry. Photograph: Saul Loeb/Pool/AFP via Getty Images

A new phase in the impeachment inquiry into US president Donald Trump begins next week, when the House of Representatives judiciary committee holds its first public hearings in the inquiry into Mr Trump’s activities in Ukraine.

The committee – which is responsible for drawing up articles of impeachment against the president – scheduled its first public deposition for December 4th, following the conclusion of the House intelligence committee’s public hearings last week.

The White House has been invited to send a counsel to attend and question witnesses. While the committee has not announced who will testify, it is expected that the witnesses will include legal experts on impeachment.

“The president has a choice to make,” said committee chairman Jerry Nadler. “He can take this opportunity to be represented in the impeachment hearings, or he can stop complaining about the process. I hope he chooses to participate in the inquiry, directly or through counsel, as other presidents have done before him.”

The impeachment inquiry was opened in September after details of a phone call between Mr Trump and Ukrainian president Volodymyr Zelenskiy emerged. During the call Mr Trump asked the Ukrainian president to do him a “favour” and referenced opening investigations into former US vice-president Joe Biden and his son Hunter. Mr Biden is a leading candidate in the race for the Democratic nomination for the 2020 presidential race.

The latest developments in the inquiry indicate that Democrats are pressing ahead with the process, despite the fact that several current and former Trump administration officials have not complied with requests by Congress to co-operate with the investigation.

On Tuesday, the justice department announced plans to appeal a federal district court decision compelling former White House lawyer Don McGahn to comply with a congressional subpoena, a ruling that could have implications for the impeachment inquiry.

The judge ruled that Mr McGahn, who was a key figure in the Mueller report into Russian interference in the 2016 presidential election, must testify before Congress.

Though the decision relates to the Mueller investigation, it potentially sets a legal precedent for a constitutional question at the heart of the inquiry into Mr Trump’s dealings with Ukraine – whether witnesses should follow orders from the White House not to testify, or obey requests from Congress to co-operate.

Former national security adviser John Bolton has indicated that he will not testify until he gets direction from the courts on the matter, with his lawyer suggesting on Tuesday that the McGahn case was different in substance to his client’s concerns.

In the lengthy ruling ordering Mr McGahn to testify, Judge Ketanji Brown Jackson said that “presidents are not kings”. “This means they do not have subjects, bound by loyalty or blood, whose destiny they are entitled to control.”

In a series of tweets on Tuesday, Mr Trump said he would be happy for his aides to testify, but that he was fighting for the rights of future presidents. “I would love to have Mike Pompeo, Rick Perry, Mick Mulvaney and many others testify about the phony Impeachment Hoax,” he wrote. “It is a Democrat Scam that is going nowhere but, future Presidents should in no way be compromised. What has happened to me should never happen to another President!”

He also described Mr Bolton as a “patriot”.

Asked at a press conference if he would testify in the impeachment inquiry, secretary of state Mike Pompeo said with a smile: “When the time is right, all good things happen.”