EU leaders to discuss next phase of Brexit at Brussels summit 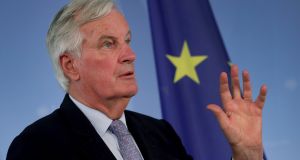 Current EU Brexit chief negotiator Michel Barnier: he has been reappointed to co-ordinate negotiations on the future relationship with the UK. Photograph: AP Photo/Michael Sohn

EU leaders have agreed to set aside time at their summit in Brussels next week to discuss launching the next phase of the Brexit process.

Draft leaders’ conclusions obtained by The Irish Times reiterate the urgency of the “timely ratification” of the withdrawal agreement, and welcome the reappointment of current chief negotiator Michel Barnier to co-ordinate negotiations on the future relationship with the UK.

A meeting of 27 EU leaders on Friday morning next week – minus the UK – will take place in the immediate aftermath of the British election on Thursday. It should be clear then after a night of counting whether prime minister Boris Johnson has the clear majority he needs to pass the withdrawal agreement, and the leaders will discuss any immediate challenges arising.

The UK is due to leave the EU on January 31st if the Commons approves the withdrawal agreement, and then enters a transition period until the end of 2020, during which the old rules/rights still apply.

If the withdrawal agreement is not approved by the end of January, the UK crashes out in a no-deal scenario or may be allowed another extension if sought.

The draft conclusions say the EU “reconfirms its desire to establish as close as possible a future relationship with the UK in line with the political declaration and respecting the previously agreed European Council’s guidelines, as well as statements and declarations”.

To that end the summit will mandate the commission to urgently propose a detailed mandate for the talks to the general affairs council of Europe ministers: “Negotiations should be organised in a way that makes the best possible use of the limited time available for negotiation and ratification by the end of the transition.”

The aspiration to conclude such talks by the end of 2020 will be welcome in London, although there is no guarantee that the timeframe will actually be achieved.

The leaders will charge the general affairs council, their ambassadors to the EU, and a specialist working group to oversee the negotiating process led by Mr Barnier “in a spirit of unity and transparency with all member states”, replicating the approach taken in the first phase of talks on the withdrawal agreement.