Ronnie O’Sullivan: Players being treated like ‘lab rats’ at Crucible 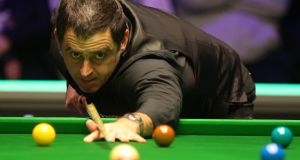 Snooker players are being treated like “lab rats” at the World Championship, former world number one Ronnie O’Sullivan has said, as he questioned a decision to allow spectators into the Crucible Theatre amid the novel coronavirus pandemic.

The July 31st to August 16th event at Sheffield’s Crucible Theatre will see a limited number of spectators as part of the British government’s plan to “stress test” new guidelines.

Anthony Hamilton, who suffers from asthma, had branded the decision to allow spectators to attend the event as “ridiculous” and O’Sullivan agrees.

“They’re treating this snooker event like lab rats really, so what can you do? You can sit here and complain and say it isn’t right, but it is what it is,” said O’Sullivan, who faces Thailand’s Thepchaiya Un-Nooh on Sunday.

“Maybe they have to start doing tests on crowds at some point. You’ve got to start somewhere, so why not start with snooker players - less insurance to pay out for Anthony Hamilton than there is for Lewis Hamilton.

“I defy anybody, if they’ve been keeping their distance from people for four months, to say, ‘oh right, now you’ve got to go into a room full of people’ - unless you’ve got a death wish, and some people have in many ways; they just don’t care.”