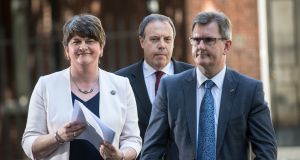 MPs at Westminster have debated a petition backed by the DUP condemning the Northern Ireland protocol and calling for the immediate removal of “any impediment or barrier to unfettered trade within the United Kingdom”.

DUP deputy leader Jeffrey Donaldson said the speed with which the petition reached the 100,000 signatures needed to trigger a debate at Westminster demonstrated the depth of feeling in Northern Ireland about the protocol. He said the protocol’s negative impact was not just on trade but on Northern Ireland’s relationship with the rest of the UK.

“If the stated objective of this protocol is to protect the peace process and the agreement, then I have to say… it is not having that effect. It is creating economic instability in Northern Ireland and has the potential to create political instability and that’s why we need to see the government acting to deal with this issue,” he said.

SDLP leader Colum Eastwood acknowledged unionist concerns about the protocol but said it was there to protect against a hard border in Ireland. He said the DUP should tone down their rhetoric and work with other parties to deal with problems in the protocol’s implementation.

Simon Hoare, the Conservative chairman of the Northern Ireland Affairs Committee called for patience as the protocol still needed to “work out its creases” after less than two months in operation. He said trade volumes across the Irish Sea were returning to normal but businesses within Britain needed more awareness about what they need to do.

“Calling for the triggering of Article 16 or the abandonment of the protocol is, I would suggest, naïve and premature, hopefully not needed at all,” he said.

Labour’s shadow Northern Ireland secretary Louise Haigh expressed concern that the appointment of David Frost to oversee relations with the EU could herald a return to the acrimony that accompanied the Brexit negotiations.

Responding to the debate, Northern Ireland minister Robin Walker said the protocol was agreed as a practical response to Northern Ireland’s special circumstances after Brexit. He said it should impact as little as possible on people’s everyday lives and that issues such as difficulties in importing plants from Great Britain must be addressed.

“We will always consider all instruments at our disposal, including invoking Article 16 if necessary, to protect the interests of the people of Northern Ireland and safeguard the effective movement of goods, services, people and capital throughout the United Kingdom,” he said.