Catalan unrest over jailing of rapper sparks furore over police 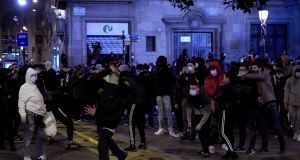 Protesters riot during a march against the imprisonment of Spanish rapper Pau Rivadulla Duro (also known as Pablo Hasel) in Barcelona, on Sunday. Photograph: Alenjandro Garcia/EPA

A week of unrest in Catalonia triggered by the jailing of a rapper has brought the region’s police force under scrutiny and could hamper efforts to form a new government.

Pablo Hasél was arrested on Tuesday to begin a nine-month jail sentence for glorifying terrorism and insulting the crown. His conviction was based on a series of comments he had written on social media and the lyrics to one of his songs.

His jailing has drawn thousands of protesters demanding his release on to the streets on successive nights in Barcelona and other cities in Catalonia and some other parts of Spain. Although the majority of the protesters have been peaceful, a minority has repeatedly clashed with police, burned rubbish dumpsters and vandalised and looted local shops and businesses.

Between last Tuesday and Sunday, 109 people were arrested in the northeastern region while taking part in the demonstrations.

The Catalan police, the Mossos d’Esquadra, who are supervised by the regional government, have faced criticism for their handling of the disturbances. Footage posted on social media has shown several instances of officers charging into peaceful demonstrators and attacking them with batons. A 19-year-old woman lost an eye in the unrest after being hit by a foam projectile fired by riot police.

The Catalan interior minister, Miquel Sàmper, appeared to reprimand the police force when he called for an urgent review of its methods following that incident. Mr Sàmper belongs to Together for Catalonia (JxCat), which governs the region in a pro-independence coalition. Marta Vilalta, a spokeswoman for the other coalition partner, the Catalan Republican Left (ERC), echoed his comments, calling for “a democratic police force adapted to the 21st century, which leans more towards mediation”.

Both parties have condemned the jailing of Hasél as evidence of Spanish state repression.

Two of the Mossos d’Esquadra’s representative bodies responded angrily to the criticism. One accused political parties of criminalising the regional police and another warned it would make the force “ungovernable” if it continued to be undermined.

However, as the protests saw further violence by those taking part over the weekend, Mr Sàmper and the Catalan government shifted their position, apparently in a bid to appease the police. The minister said that the situation had changed, from demonstrations defending freedom of speech to “pure vandalism”.

Many other parties have supported the police and denounced the violence of protesters. Alejandro Fernández, of the conservative Popular Party (PP), compared the breaking of the windows of a Barcelona concert hall during protests with the Taliban’s destruction of statues in Afghanistan.

The Hasél protests have come just days after a Catalan election. Although the unionist Socialist Party won a tight vote, ERC and JxCat are in talks aimed at forming a new administration.

If the two parties are to create another pro-independence government, they will almost certainly need the parliamentary support of the leftist Popular Unity Candidacy (CUP). The CUP is maintaining a firm stance against the police, and has called for Mr Sàmper’s resignation, which could be an obstacle to an agreement.

Carles Riera, a member of parliament for the party, said the Mossos had “created a climate of violence” and called for the disbandment of its anti-riot unit.