Northern Ireland is no longer governed as integral part of UK 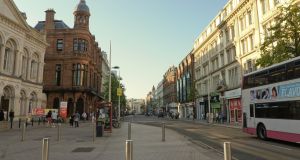 Northern Ireland finds itself in one political/economic entity (the EU) while the rest of the United Kingdom is in another.

Squashing Northern Ireland more firmly into the constitutional granny flat built by the Northern Ireland protocol is one thing: but making it difficult for people to buy seeds, sausages, supermarket essentials and goods ordered online, as well as requiring “passports” for their pets to accompany them on visits to Britain, is quite another. And it’s not just unionists who are cross: indeed it’s hard to find anyone who won’t be hit in one way or another by the avalanche of restrictions on trade between Britain and Northern Ireland.

All of which is very bad news for the DUP which, until the final days of 2020, had been praying for a miracle to render potential trading chaos invisible to the naked eye of its core vote. Arlene Foster and other leading members had even begun a strategy of welcoming the “new opportunities” afforded by Brexit: a strategy which crashed and burned as soon as people began contacting newspapers and radio phone-ins with an ever-lengthening list of the inconveniences and non-deliveries they were experiencing.

The DUP has another problem – unambiguous rumblings of discontent from those who are close to loyalist paramilitarism. In October 2019, shortly after the protocol first entered the public domain, I asked Jim Wilson, a leading loyalist, what he made of it: “Our backs are to the wall and we need to see a deal from the EU, Dublin and London that doesn’t make mincemeat out of us... because that could lead to violence. We’re looking at a totally different situation now than we have been before. It is about the union and a change to the union that makes this different, puts us into an economic united Ireland. And people on the streets are anything but happy.”

It’s 15 months later and his concerns have grown. The Loyalist Communities Council (which represents the UVF, UDA and Red Hand Commando paramilitary groups) has voiced those concerns very publicly. As have the other main unionist parties (UUP, TUV and PUP) and the Orange Order. It’s hardly surprising, of course, because this is a perfect storm double whammy for unionism: pushed further from Great Britain’s orbit than ever before, and with daily reminders that Northern Ireland is no longer governed as an integral part of the United Kingdom.

I can’t remember a moment when unionism has been so unsettled. The fall of the Stormont Parliament (1972), the Sunningdale Agreement (1974) and the Anglo-Irish Agreement (1985) all meant challenges and anger, but all were offset by the fact unionism remained electorally strong. And crucially, none of those moments required Northern Ireland to be in one political/economic entity (the EU in this case) while the rest of the United Kingdom was in another. That’s why this is now a full-blown constitutional crisis: it’s not just the economy, stupid.

So again, it’s no surprise unionist unity is top of the agenda. I’m not aware of a significant section of the pro-union/unionist community (including those who voted Remain in 2016 and who have been very critical of the DUP’s relationship with the Conservative party’s hardest of hard-line Brexiteers) which is not angry with the Northern Ireland Protocol. Most of them, even those who would describe themselves as moderate, believe they have been betrayed by Boris Johnson. And most of them also believe unionism needs an agreed strategy and message if the constitutional damage is to be repaired or, at the very least, the consequences kept to an absolute minimum.

But here’s the question: what does united unionism do right now? There have been calls for the 40 unionists in the Assembly to combine their forces and disrupt all legislation linked to the protocol. But that wouldn’t, of itself, end or significantly change the protocol. Others suggest unionists should leave the Assembly altogether: “Do what Sinn Féin did to us between 2017-2020,” as one MLA put it to me. But that would leave the key decisions with Johnson and his government, which, given what he did to the DUP, would seem an absurd strategy. Also, unionists collapsing the Assembly in Northern Ireland ’s centenary year is not, to put it kindly, the best sort of look.

Making Johnson choose between the protocol and the Assembly (along with the Belfast Agreement structures and the entire political/peace process) is being whispered as a strategy in some quarters. But Johnson has no votes or seats in Northern Ireland and certainly doesn’t want to antagonise his own Brexiteer MPs or voters; so forcing him to make that sort of choice is unlikely to deliver a unionist-friendly outcome.

The DUP has no leverage and few friends in the House of Commons, where their motion on triggering article 16 (to secure unfettered trade between Britain and Northern Ireland) will be debated on Monday. It’s unlikely to succeed, although the government may produce a form of words to assuage immediate unionist/loyalist fears.

Unionists are in rock/hard place territory. Few reliable allies. No guarantee of doing well if an early Assembly election were called. No guarantee an early border poll couldn’t be called. No coherent strategy beyond “We have to be seen to be doing something.” No guarantee a unionist unity vehicle wouldn’t collapse in disarray – as they did in 1972, 1974, 1985 and 2013.

Meanwhile, Westminster must decide if keeping the North’s unionists happy trumps the present Brexit deal. The EU must decide if protecting the Belfast Agreement and peace process matters more than getting the upper hand over Johnson. Dublin needs to decide if a hugely unsettled unionism could lead to spillover problems from loyalism.

And unionists need to face the reality that overplaying their hand might lead to an ultimate uncomfortable truth – they are an unwanted part of the United Kingdom: a message already hinted at by a protocol which pushes them closer to Dublin and Brussels than to London, Cardiff and Edinburgh.