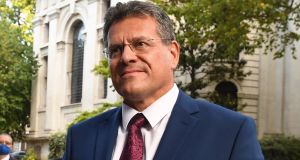 Paperwork and checks associated with the Northern Ireland Protocol has disrupted some business from the rest of the UK and prompted unionist discontent.

European Commission vice-president Maros Sefcovic has expressed willingness to show flexibility but maintained the agreement with London to prevent a hard border on the island of Ireland would not be scrapped.

He is in charge of UK-EU relations for Brussels and will hold a virtual meeting with trade body representatives grappling with problems caused by Northern Ireland’s continued adoption of EU rules.

The EU and UK government is canvassing the views of traders and other civic society representatives in Northern Ireland on the impact of the new Irish Sea trade arrangements.

The Swiss model has been suggested as a way to ease disruption on Britain to Northern Ireland shipping.

Under the terms of the protocol, which ensures a free-flowing border on the island of Ireland, the region has remained in the single market for goods.

That means products entering the region from Britain must comply with strict EU rules on animal and plant health.

Traders must now comply with a range of new processes and checks to ship animal-based food products and plants across the Irish Sea into Northern Ireland.

The agreement the EU has with Switzerland avoids such checks because the Swiss align their own regulations on animal and plant health with the bloc’s.

When the EU changes its rules, the Swiss change theirs to ensure continued alignment.

The protocol is not yet fully functioning as a number of grace periods are in operation that limit the number of certifications and declarations required to move goods.

These exemptions will lapse at different points in the weeks and months ahead.