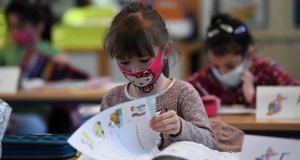 German children began returning to their classrooms and kindergartens on Monday, as growing fears of another wave of infections complicated plans to look beyond case rates as the best benchmark for suppressing Covid-19.

This effectively began on Monday, when hundreds of thousands of children in 10 German states put homeschooling and daycare behind them for the first time in two months.

Schools in states such as Berlin and North Rhine-Westphalia have halved class sizes, some teaching children on alternate days, and added other precautions including obligatory masks and ventilation.

“Taking these first steps to open up is the right thing to do for children and their wellbeing,” said Franziska Giffey, federal family minister.

If the reopening of schools is a success, Dr Merkel suggested on Monday allowing looser rules in other limited sectors: increasing first the number of personal contacts and, later on, the opening of sports and cultural events, as well as restaurants and cafes.

Dr Merkel has been consistently cautious on loosening lockdowns, something that has created tension with Germany’s 16 state leaders, who are largely responsible for health and education policy.

Amid the relief at reopening schools and childcare are some misgivings that it comes just as Germany’s third Covid-19 wave may be gathering momentum.

New data shows how, more than two months into its second lockdown, a recent plateau in new infections has given way once more to a slow rise.

Despite the setback, the chancellor has asked Dr Braun to develop a differentiated lockdown plan ahead of the next meeting with regional leaders in a week’s time.

The move is largely driven by events: a weekend of fine spring weather across the country drew out crowds in large numbers to parks, rivers and lakeshores, leaving local police struggling to enforce existing rules.

After shutting all non-essential retail services in mid-December, this month’s plan made provision for hairdressers to reopen on March 1st and retail to follow a week later – provided the local incidence rate has dropped to 35.

“Once schools and daycares reopen, millions more people will be out and about, and we need to see what difference that makes regarding the mutations,” he said.

Mr Spahn added it was too soon to “make any false promises” about further relaxations in lockdown rules.

On Monday he met state health ministers to discuss whether reopening schools required a reorganisation of Germany’s vaccination strategy. In particular, pressure is growing to add teachers and childcare workers to the first group to be vaccinated once pension-age Germans have received their jabs.