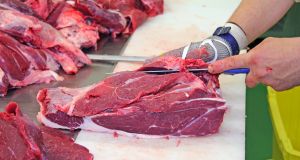 Mean industry: The hard work of staff and suppliers has helped keep food on our shelves through the Brexit crisis and the Covid pandemic.

I’m told that when you take your first skydive and the parachute safely opens to check your rapid descent to earth that the feeling of relief is palpable, but you soon realise that there’s plenty that could still go wrong before you land with all your limbs intact.

That’s a bit how the meat industry in Ireland is feeling about Brexit. With the last-minute completion of a trade deal between the EU and UK, the parachute opened to stop the freefall on December 24th, and January 1st passed without a crisis. Trade has continued to flow with our nearest neighbour, and a delicious Irish rib-eye steak is on the supermarket shelf and available to UK consumers to enjoy.

Strangely it was the panic about the new Covid strain, rather than Brexit, that led to news bulletins filled with pictures of Kent being turned into a parking lot after France shut its border on public health grounds, just before Christmas.

As the Government warned in a recent Brexit update: “seamless trading no longer exists” and that is imposing significant additional compliance and transport costs

Yet just because the parachute opened, and we are through the first month, we are by no means out of the woods. This is doubly true given we are battling the severe impact of Covid-19 at the same time, which has decimated export demand for Irish meat products from the food service and restaurant sector on which we are so reliant.

Don’t get me wrong, reaching a deal to continue tariff- and quota-free trade on Christmas Eve was hugely significant, and helped us to avoid the dreaded prospect of defaulting to World Trade Organisation tariffs that would have slapped a 70 per cent increase in the cost of the UK importing beef from Ireland.

But tariff- and quota-free trade doesn’t mean the changes imposed by Brexit aren’t wide-ranging and costly. As the Government warned in a recent Brexit update: “seamless trading no longer exists” and that is imposing significant additional compliance and transport costs.

We estimate costs of exporting for our members have risen by 25 and 40 per cent since January 1st. For example, it costs €500-€800 extra per truck to send exports to Continental Europe direct rather than risk the complexities and delays of taking the UK land-bridge route. Hauliers sending trucks to the UK face difficulties filling their trucks for the return journey due to paperwork and logistical minefields, which means they are looking to increase the costs they charge per journey.

New customs formalities and additional sanitary and phytosanitary (SPS) controls are among the burdens that mean exporters must also invest in additional IT and personnel to handle exports in the new trading environment.

And it’s going to get worse rather than better, given that a range of further measures are coming in between April and July. From April 1st all products of animal origin will need to be accompanied by a veterinary certificate. The Department of Agriculture estimates this will require more than 350,000 export health certificates to be issued per annum, with serious potential to cause trade flow disruption and add more cost to exporting.

Where possible, we must seek to maintain our position as a high-value, high-quality provider to a market like the UK

We must remain confident that with the right Government and EU support, we will be able to overcome these short-term logistical and administrative challenges, with all the costs that the end of frictionless trade means.

In the medium term, risks also remain around the free-trade deals the UK may look to sign and whether it decides to opt for a “cheap food” policy of sourcing meat from countries where environmental and safety standards that underpin the quality of EU food don’t apply.

Where possible, we must seek to maintain our position as a high-value, high-quality provider to a market like the UK, which has a substantial food deficit. But we must also look to continue the path of diversification into new markets, a strategy on which we have already made progress. The UK market accounted for 47 per cent of Irish beef exports last year but, bear in mind, in the year of the Brexit vote (2016) that figure was 56 per cent.

The Government has played an important role in helping the sector address the challenges faced, as was demonstrated most recently in their approval of a €100-million capital investment programme to support the investments that meat and dairy processors are making in new technology, packaging, and research to support market and product diversification.

The meat industry has its fair share of critics, many of whom fail to appreciate that it is a sector that directly employs more than 16,000 people

Other important areas to continue to focus on include: enhanced resourcing for the Department of Agriculture market access unit, continued support for Bord Bia’s overseas marketing initiatives, and further pressure to regain access to the Chinese market, which has now been closed to beef exporters for over eight months.

The meat industry has its fair share of critics, many of whom fail to appreciate that it is a sector that directly employs more than 16,000 people and thousands more in associated service industries, as well as supporting the livelihoods of 100,000 farmers.

It is the hard work of these staff and suppliers that has helped keep food on our shelves through the Brexit crisis and the Covid pandemic. They deserve our thanks. As a vital business in Ireland contributing €4 billion in annual exports, there should be some pride that the industry has stepped up and met the initial Brexit challenge and is showing great resolve in dealing with the ongoing adversities it faces.