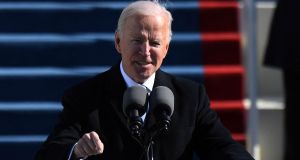 US president Joe Biden will share a message at the annual Glucksman Ireland House dinner on Tuesday evening, an online event that will also be addressed by Taoiseach Micheál Martin.

It will mark the first official engagement by the new president with an Irish American event since his inauguration last month.

The president is expected to highlight the role his Irish background has played in his life, imbuing him with “a sense of pride that spoke of both continents, a heart and soul that drew from the old and new – a pride in community, faith, and, above all, family”.

Mr Biden, who traces his ancestry to counties Mayo and Louth, is the first US president with an Irish-Catholic background since John F Kennedy.

The annual Glucksman Ireland House gala in New York, which is being held virtually for the first time, will honour former president Mary McAleese, vice-chair of Bank of America Anne Finucane, and New York Times columnist Dan Barry, who will receive the inaugural Pete Hamill award for journalistic excellence.

Mr Biden is expected at the event to indicate his willingness to work with the Taoiseach to “address the great challenges of our time — this deadly pandemic, the economic unease and anxiety, the climate crisis, and the rise of political extremism and risk of isolationism. Let us work together so we are the nations where hope reigns with an optimism that is brave and digs deep.”

Earlier this month it was announced that the annual St Patrick’s Day celebrations in Washington, DC, will not take place in person this year, due to the Covid-19 pandemic. The Taoiseach will not travel to Washington, as is customary. Instead a programme of virtual events is being planned to mark March 17th in conjunction with the White House. St Patrick’s Day parades across the US are also being suspended for the second consecutive year, because of Covid restrictions.

Glucksman Ireland House is one of the leading institutes for Irish studies in the US.

A part of New York University, it houses the Archives of Irish America and offers undergraduate and postgraduate courses.