Labour LeaderJeremy Corbyn has obtained a confidential report which he argues “drives a coach and horses” through Boris Johnson’s claim that there will be no border in the Irish Sea under his Brexit plan. 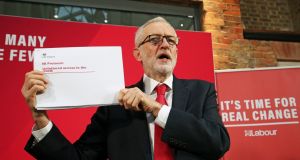 Jeremy Corbyn has said he has obtained a confidential report which “drives a coach and horses” through Boris Johnson’s claim that there will be no border in the Irish Sea under his Brexit plan.

The Labour leader said the leaked document, marked “official, sensitive”, provides the “cold, hard evidence” that the British prime minister has been “misleading” people about his withdrawal deal.

Brandishing a document, titled Northern Ireland Protocol: Unfettered Access To The UK Internal Market, at a press conference in central London, Mr Corbyn said it was proof that there would be customs checks between Great Britain and Northern Ireland after Brexit.

“What we have here is a confidential report by Johnson’s own government, marked ‘official, sensitive’, that exposes the falsehoods that Boris Johnson has been putting forward,” he said.

“This is cold, hard evidence that categorically shows the impact a damaging Brexit deal would have on large parts of our country.”

The 15-page document appeared to be a slideshow prepared by the Treasury and is titled “NI Protocol: Unfettered Access To The UKIM”.

Mr Corbyn said Mr Johnson’s Brexit deal will be “disastrous for businesses and jobs all across the UK” and claimed the Government’s confidential report “confirms this”.

The document, he said, paints a “damning picture” of the prime minister’s deal, especially when it comes to Northern Ireland.

“We have now caught Johnson red-handed misrepresenting his own Brexit deal,” he told journalists.

Mr Johnson had said there would be no checks between Northern Ireland and Great Britain under his exit terms, but Mr Corbyn said the document suggests that is not true.

The Labour leader said page five of the document states: “There will be customs declarations and security checks between Northern Ireland and Great Britain.”

He added: “It is there in black and white. It says there will be customs declarations, absolutely clearly, for trade going from Northern Ireland to Great Britain.

“For trade going the other way, from Great Britain to Northern Ireland, there will be all of the above plus potentially damaging tariffs.”

“It says this deal will be the equivalent of imposing tariffs on 30 per cent of all purchases made in Northern Ireland,” he said.

The Labour leader also said the document warns of the potential for fraud, saying Northern Ireland could become a “backdoor into the GB market for the avoidance of import duties”.

Last month Mr Johnson suggested his Brexit secretary Stephen Barclay had been wrong to say goods between Northern Ireland and the rest of the UK would face checks as a result of the Brexit deal struck with the EU.

Mr Barclay previously told MPs that “some information” and “minimal targeted interventions” would be required on goods travelling between the two areas of the UK, due to Northern Ireland remaining aligned with Dublin and Brussels’ trading rules for agricultural products and manufactured items as part of the exit terms.

It comes ahead of the final scheduled head-to-head debate between Mr Corbyn and Mr Johnson later on Friday, and after the Mr Johnson was berated by Andrew Neil for refusing to do an interview on his BBC show.

Mr Neil said that if Mr Johnson is expected to face the likes of Donald Trump and Vladimir Putin then he should be able to sit down for a half-hour interview with him.

Mr Johnson has been accused of “running scared” from scrutiny by avoiding in-depth questioning from the veteran broadcaster, even though rival leaders, including Mr Corbyn, have taken part.

The prime minister, who has also refused to do an interview on ITV’s Julie Etchingham, will debate with Mr Corbyn on the BBC on Friday night, with less than a week to polling day.

Some 6.7 million people tuned in when the pair took part in a head-to-head debate on ITV last month.

On Thursday night, Mr Neil challenged Mr Johnson to finally agree to an interview on the theme of “trust” and why voters have “deemed him to be untrustworthy”.

A senior Tory source claimed the public are “fed up” with TV interviews that are “all about the interviewer and endless interruptions”.

“The format is broken and needs to change if it is to start engaging and informing the public again,” the source said.

“The PM will focus on talking to voters about people’s priorities including investing in our NHS and helping with the cost of living.”

Mr Johnson is said to have taken part in more than 100 interviews during the election campaign, and discussions on the Neil interview are understood to be ongoing.–PA