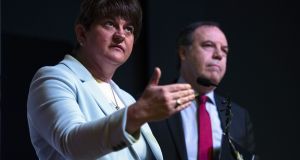 DUP leader Arlene Foster with deputy leader Nigel Dodds at the launch of the party’s manifesto in Belfast. The party’s MP Paul Girvan should have enough to hold on to his seat in South Antrim. File photograph: Charles McQuillan/Getty Images

South Antrim is a constituency where since the start of this Millennium the DUP and the Ulster Unionists have fought great battles to win the seat, with another big bout in train at the moment.

From 1983 up until his death in 2000 the Ulster Unionist Clifford Forsythe held South Antrim with comfortable majorities but amid the unionist upheaval of the UUP signing up to the 1998 Belfast Agreement the Rev William McCrea took the constituency for the DUP in the byelection of 2000.

David Burnside regained it for the UUP the following year, while McCrea took control again in 2005 and held it in 2010. Five years later, the UUP’s Danny Kinahan won it while two years later Paul Girvan recovered it for the DUP.

So this is a see-saw constituency with the two chief contenders again Girvan and Kinahan. In 2017, Girvan won by more than 3,200 votes which is a sizeable majority to overhaul.

Kinahan, a former British army officer who also worked as a high-end auctioneer in Christie’s, believes he can catch up on Girvan. He comes up with a wonderful paradox when describing the response on the doorsteps as he canvasses towns, villages and rural areas such as Newtownabbey, Randaldstown, Templepatrick, Doagh and Ballyclare.

By a small margin – 1,000 votes – South Antrim voted to Leave and Kinahan, a firm Remainer, believes that his wish to stay in the EU may have cost him his seat in 2017. He thinks though the wheel has turned and that in South Antrim a majority now would vote to stay.

“I thought it would damage the union, was not good for our economy and would divide. The evidence is that is what it has done,” he says. That message is now getting through, he feels.

Kinahan, if he is to win, will need the help of some of the Alliance voters and also of some Sinn Féin and SDLP supporters and anyone else who might rally to his cause.

In 2001 and 2015 a body of Alliance people temporarily switched allegiance to the UUP to assist in ousting former DUP MP Rev McCrea.

That could happen again although the Alliance candidate, John Blair, who is an Assembly member and one anxious to make his own stamp in politics, is competing to make a serious impression, as are the Sinn Féin and SDLP candidates, Declan Kearney and Róisín Lynch.

Where Girvan has an advantage is that he is not Rev McCrea, whose old-style, hardline form of DUP unionism tended to motivate the centre-ground in South Antrim to endorse whoever had the best chance of defeating him.

Girvan, a former MLA who has been involved in politics since 1997 maintains a low profile and hasn’t featured in any significant controversies. He is in favour of a feasibility study to build a bridge between Northern Ireland and Scotland but otherwise keeps his head down, works hard and gets on with the business of the constituency.

South Antrim has the capacity to surprise and Kinahan has a chance. But angry and all as are the voters of South Antrim they just might not be angry enough to allow him dislodge Girvan in this see-saw constituency.