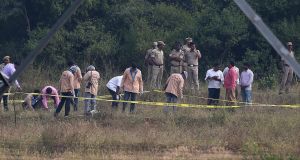 Policemen watch forensic experts at the site where four men suspected of raping and killing a woman were killed in Shadnagar, India, on Friday. Photograph: Mahesh Kumar/AP

Indian police have shot dead four men suspected of raping and killing a 27-year-old woman in the southern city of Hyderabad last week, in an episode activists and jurists categorised as extrajudicial executions.

But the killing of the four men in police custody early on Friday morning was applauded by the rape victim’s family. The men were shot near the scene of the rape and murder, which took place on the outskirts of Hyderabad on November 27th, after the men had been taken there by armed investigators.

“It has been 10 days since my daughter died and this is perfect justice for what they did to her,” the rape victim’s father told local news channels. Expressing “sincere gratitude” to the police and the government, he said his daughter’s soul would now find peace.

Police commissioner V N Sajjanar told the media in Hyderabad that the men – aged between 20 and 26 – were killed in self-defence after they attacked their captors with stones and sticks, snatched two of their weapons and began firing.

The police party “exercised restraint” and asked the accused to surrender, but they continued attacking the police officers, he said, adding that two policemen had suffered head injuries from the stone pelting and were hospitalised.

The police were forced to defend themselves and in an “encounter lasting five to 10 minutes” they shot dead the four men, the commissioner said. He declined to elaborate.

He also contradicted an earlier claim by a police official that the shooting had occurred at 3.30am, and said it occurred at about 6am.

The police commissioner was also unable to provide a satisfactory explanation as to why the four accused were taken to the crime scene before dawn, to assist investigators in collecting forensic evidence in the rape and murder case.

Police said the rape victim, a veterinarian, had left home late last month on her scooter, which had a flat tyre near a toll plaza in a Hyderabad suburb. The suspects in the case are reported to have deflated the tyre while the scooter was parked.

In a call to her sister, she said that a truck driver had offered to help but police said she was abducted soon afterwards, raped and asphyxiated. Her body was doused with petrol and set alight.

As news of the shooting of the four suspects spread, thousands of Hyderabad residents took to the streets shouting slogans in praise of the police and state chief minister K Chandrasekhar Rao.

Many also placed flowers on the spot where the shooting had taken place, chanting loudly that “justice has been delivered”.

Political leaders and celebrities across the rest of the country, incensed over recurring sexual crimes against women, also approved of the shootings on social media and on television news channels.

“The police have not been given weapons as a showpiece,” Meeakshi Lekhi, an MP from prime minister Narendra Modi’s Hindu nationalist Bharatiya Janata Party (BJP), said in parliament. The police, she added, had followed the due process of law.

Earlier, Opposition MP Jaya Bachchan, a former Bollywood star, had advocated summary justice for the four arrested for rape and murder. “These kind of people should be brought out in public and lynched, ” she had declared.

Human rights activists, however, questioned the justification for the shootings.

“The killings are a ploy to shut down our demand of accountability from the government, the judiciary and police,” said Kavita Krishnan of the All India Progressive Women’s Association. “We demand a thorough investigation into this.”

Her views were echoed by Meneka Gandhi, a BJP MP who said the killings were a “dangerous thing to have happened”.

Delhi’s chief minister Arvind Kejriwal said people were lauding the killing because most Indians had lost faith in the country’s criminal judicial system. Action was required to recity this, he said.