R Kelly pleads not guilty to 10 counts of sexual assault 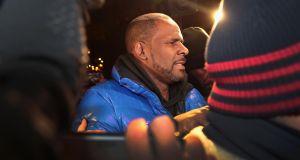 R Kelly turning himself in to a Chicago police station. He was arrested and charged with 10 counts of sexual assault. Photograph: Scott Olson/Getty Images

Grammy-winning R&B star R Kelly pleaded not guilty on Monday to charges that he sexually assaulted three teenage girls and a woman in alleged incidents dating back to 1998, weeks after a television documentary levelled new accusations against him.

The 52-year-old performer, whose real name is Robert Kelly, is charged under a 10-count indictment with sexually assaulting three teenagers, with each count carrying a maximum of 10 years in prison.

Dressed in an orange jail jumpsuit, Kelly appeared in a Chicago courtroom before Cook County associate judge Lawrence Flood and spoke only to confirm his name.

His lawyer, Steven Greenberg, entered a not guilty plea on Kelly’s behalf.

Prosecutors say the victims include a teenager Kelly met when she sought an autograph during his previous trial on child pornography charges, another he met at her 16th-birthday party and his hairdresser, who was then 24.

The singer was acquitted of the pornography charges.

A fourth charge is based on a videotape that purportedly shows Kelly and a 14-year-old girl engaged in sexual acts, according to prosecutors.

Kelly faced the child pornography charges more than a decade ago, at a trial where the victim did not testify.

Michael Avenatti, a lawyer representing two accusers, told reporters after Monday’s hearing that he had turned over a second videotape to prosecutors earlier in the day.

The video was about 55 minutes long, dated from around 2000 and also showed a 14-year-old girl, though he did not make clear whether it was the same girl as in the first video.

Among the conditions of release is that Kelly have no contact with women younger than 18.

At the bail hearing, Mr Greenberg said his client is not a flight risk. He told the judge: “Contrary to the song, Mr Kelly doesn’t like to fly.” One of Kelly’s best-known hits is I Believe I Can Fly.

However, the judge ordered Kelly to surrender his passport, ending his hopes of doing a tour of Europe in April. Mr Greenberg denied that any tour was planned.

Kelly’s lawyer Mr Greenberg told reporters that his client hopes to post the required $100,000 cash bail on Monday evening to be released from a prison hospital unit where he was placed to keep him apart from the general inmate population.

“Mr Kelly has done absolutely nothing wrong,” Mr Greenberg said. “No one has showed us any evidence that he has done anything wrong.”

The charges against the performer came just weeks after the US Lifetime television network aired the six-hour documentary series Surviving R. Kelly, in which multiple women accused him of sexual misconduct and abuse. – Reuters, Press Association