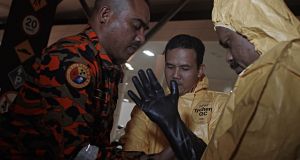 Kim Jong-nam, the ill-starred son of a North Korean dictator, was poisoned by two women who smeared his face with VX nerve agent at Kuala Lumpur International Airport, prompting a diplomatic row that has inflamed an already toxic geopolitical mess.

You couldn’t make it up, and yet the February 13th assassination reads eerily like a case for Inspector O, the hard-boiled North Korean detective created by James Church, the pseudonym of an ex-CIA analyst who has written six novels about the Pyongyang gumshoe.

Church modestly describes himself as “a former intelligence officer who had years of experience in Asia, and who never so much as ruffled the feathers on a sparrow”. He is uniquely placed to comment after dozens of visits to North Korea and years spent poring over daily propaganda dispatches from Pyongyang.

“One can imagine the guidelines set out: no collateral damage, no sowing terror, just do the hit and get out,” Church says. “No car bomb, no blast killing scores, no innocents sacrificed” – other than the two women, whose recruitment and extent of involvement remains to be determined.

Church says the assassination was far more discreet than previous high-profile attacks overseas by the North Koreans, although the use of the VX nerve agent he describes as a “very, very bad decision”.

“To that extent, this one was certainly different,” says Church. “And the four presumed operatives got neatly away, apparently earning a lot of airline points with the circuitous routing they took back to Vladivostok and then home. Why in the world the two women were left behind like that remains to be understood.”

The timing of the incident is also curious, he says, coming shortly before North Korean officials were set to get visas to travel to the US for the first time in years. US president Donald Trump has cancelled the meeting over the killing, which occurred as Kim Jong-nam awaited a flight to Macau.

North Korea has made the region jittery with a series of nuclear weapons and missiles tests. Trump has said he will put pressure on the country to end its nuclear programme, as well as push China, the nearest thing the North Koreans have to an ally, to help.

Pyongyang vehemently denied the bombing in Yangon (known then as Rangoon). There was a subsequent reshuffle of some key personnel and the Burmese derecognised North Korea.

The long-term effects of the two earlier bombings was for North Korea to be classified as a designated state sponsor of terrorism until 2008, one of George W Bush’s “axis of evil” states – an assignation Church fiercely opposed. Analysts, including Inspector O, will now be watching to see if the Trump administration will seek to marginalise the North still further.

Through Inspector O, Church has attempted to put a human face on a world often considered cold and grotesque. O is a decent copper in Pyongyang, a patriot who refuses to wear a little lapel badge dedicated to founder Kim Il-sung, grandfather of both current leader Kim Jong-un and victim Kim Jong-nam. O is sceptical, but he can’t escape the system.

Spoiler alert: The plot of The Man with the Baltic Stare (2010), the Macau-based fourth Inspector O book, deals with the assassination of a North Korean heir apparent and has uncanny parallels with the Kim Jong-nam assassination. Church, however, does not hold with the theory that the killing was the result of a power struggle.

“There may be some continuing palace intrigue involved, and certainly some bad half-sibling blood,” he says. “But a power struggle? Kim Jong-un is starting his sixth year in power. If there was ever any ‘struggle’, which I doubt, it would have been put to bed by now, or exist only deep in the bosoms of a few disgruntled souls.”

The incident has shaken diplomatic relations between Pyongyang and Malaysia, although Church points out how North Korea doesn’t really have any allies as such. He thinks the murder will have angered some in Pyongyang.

“Curious how, up to now, the North Koreans have not formally or authoritatively denied they did it,” he said. “The ambassador has been left to make statements, but all there is from Pyongyang so far is a statement from the ‘Jurists Committee’ several days ago.

“One wonders if the four operatives were greeted with high fives when they got off the plane at Sunan [Pyongyang’s airport], or if they were kicked in the pants?”