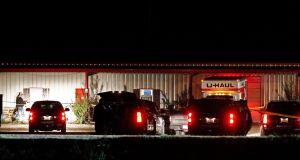 The scene outside the Party Venue after a shooting in Greenville, Texas. Photograph: EPA/LARRY W. SMITH

Two people have been killed in a shooting at an off-campus Texas A&M University-Commerce party that also left at least 14 others injured.

The shooting came as the university east of Dallas celebrated homecoming weekend.

Mr Oxford and university officials said the event was a homecoming party but was not a sanctioned school event.