Brexit: Significant gaps remain as talks may continue over weekend

French European affairs minister Clement Beaune has warned that if a good post-Brexit trade deal cannot be reached between Britain and the EU, France could veto it. Video: Reuters 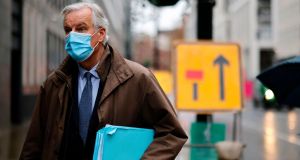 Talks between EU and British negotiators continued in London on Thursday night amid warnings that significant gaps remained as time was running out to reach a deal.

Stefaan De Rynck, a senior adviser to EU chief negotiator Michel Barnier, told a seminar in Brussels that the talks were “probably past kilometre 40” in a 42km marathon.

“The long and the short story is that talks are continuing in London. Significant divergences remain. Both sides are working hard to overcome them, but the outcome is uncertain,” he said.

Most of the legal text of an agreement running to hundreds of pages has already been agreed, but differences remain on fisheries, the level playing field of fair competition guarantees, and how the agreement should be enforced.

Sources close to both sides said that talks could continue through Friday and perhaps the weekend, with British prime minister Boris Johnson expected to speak to European Commission president Ursula von der Leyen before any final breakthrough is possible.

Mr Johnson’s official spokesman said on Thursday that the prime minister still intended on Monday to restore to the Internal Market Bill treaty-breaking clauses that were removed by the House of Lords.

The spokesman also confirmed that the British government would next week introduce a taxation bill that is expected to include clauses allowing British ministers to determine which goods moving from Britain to the North should be considered at risk of moving into the EU single market and are subject to tariffs.

France has been among the EU states most resistant to British demands for a much greater share of the fish in its own territorial waters. But during a visit on Thursday to France’s biggest fishing port, prime minister Jean Castex said his country’s fishermen must prepare for a new era.

“It is a negotiation and a negotiation must lead to compromises. And we must be with you in these compromises,” he said. “A new era is about to begin. I would like there to be a specific support plan.”

Meanwhile, Britain’s education secretary Gavin Williamson on Thursday contradicted health secretary Matt Hancock’s assertion that Brexit had allowed Britain to approve a coronavirus vaccine earlier than other countries, instead insisting it was because Britain was the best country.

“I think just being able to get on with things, deliver it and the brilliant people in our medical regulator making it happen means that people in this country are going to be the first ones in the world to get that Pfizer vaccine.”