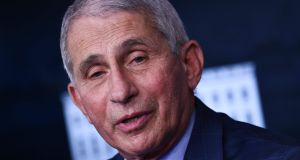 Anthony Fauci: The FDA ‘really scrutinises the data very carefully to guarantee to the American public that this is a safe and efficacious vaccine’. Photograph: Brendan Smialowski/AFP via Getty Images

Politicians, health professionals and commentators in Europe and the US have questioned Britain’s decision to fast-track approval of a coronavirus vaccine and criticised what some saw as the jingoistic tone of its announcement.

The UK on Wednesday became the first country in the world to approve a Covid-19 vaccine when the Medicines and Healthcare products Regulatory Authority (MHRA) granted the Pfizer/BioNTech shot emergency authorisation for clinical use.

Germany’s health minister, Jens Spahn, said that while he expected a quick decision by the EU’s medical regulator, the Amsterdam-based European Medicines Agency (EMA), there was a distinct difference between the approach Britain had adopted – limited emergency approval – and what Germany was looking for.

“We could have chosen that way too, but we consciously decided against it,” Mr Spahn said. The EMA approval process, expected to be completed by the end of the month, was a “more comprehensive one” and was necessary “in order to strengthen citizens’ confidence in the vaccine”, he said, adding that a short delay between approval in the UK and the rest of Europe was “not so dramatic”.

In Spain, César Hernández, the head of the department of human use medicines at the national agency for medicines and health products, said he thought other countries in Europe were unlikely to follow Britain’s lead.

“In a situation which, epidemiologically speaking, doesn’t appear to be getting worse, there has to be a very big potential benefit to outweigh the risk of bringing forward vaccination by a week or two,” Mr Hernández told El País.

“All decisions on medicines are made on those grounds. You can accept a really big risk if you’re going to see a benefit that outweighs it. Similarly, you can accept a small benefit if there’s zero risk. But here the risk is uncertain and, given there are just two weeks to go before full authorisation, that risk doesn’t seem very justified.”

In France, Bruno Lina, a virologist and member of the French government’s scientific advisory council, said Britain’s move was “a political decision”. But he added it would be “difficult to organise a mass vaccination campaign quickly. The British have taken a certain risk.”

He said a delay of two or three weeks would “not make a big difference. It’s better to wait a bit longer to be sure we can carry out our vaccination programme in the best possible conditions.” But it would be “interesting to see how Britain fares”, he said.

Another French virologist, Yazdan Yazdanpanah, told French radio: “It is not because they are going to start next week that they will do better than the rest. I think we have to take time to look properly at all the data.”

French experts also suggested the UK’s relatively low level of vaccine hesitancy when compared with many European countries may have encouraged the government to move faster, since emergency authorisation was less likely to prejudice the success of the vaccination programme.

In the US, Anthony Fauci, the director of the National Institute of Allergy and Infectious Diseases, said the way the Food and Drug Administration (FDA) was proceeding was “the correct way” and the UK “did not do it as carefully”.

Dr Fauci told Fox News that the FDA “really scrutinises the data very carefully to guarantee to the American public that this is a safe and efficacious vaccine. I think if we did any less, we would add to the already existing hesitancy on the part of many people because … they’re concerned that we went too quickly.” – Guardian