London Letter: British PM would have little difficulty pushing for the nuclear option 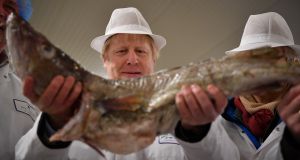 For almost a week, British and European Union negotiating teams have been meeting in the faceless offices of Britain’s business department near Victoria Station. A handful of photographers huddle outside waiting for a sign of life but there are few comings and goings beyond a few late-night pizza deliveries.

The negotiating teams led by Michel Barnier and David Frost have given little away about the progress of the talks, giving rise to wild and conflicting speculation about what is going on. Sources close to each team strike different tones, with the EU side generally more cautious about the prospect of an imminent breakthrough.

Both sides agree, however, that significant progress has been made on “level playing field” guarantees of fair competition and there has been some headway on governance. And everyone agrees that the most difficult issue and probably the last to be resolved is fisheries.

On the level playing field, Britain has agreed to an architecture that would see an independent regulator limiting the British government’s scope for subsidising business. The regulator would be British and although the parameters of state aid policy would be set out in the free trade agreement, it would not be subject to any European authority such as the European Court of Justice (ECJ).

On other level playing field issues such as employment and environmental standards, Britain appears to have agreed to a version of the ratchet proposed by the EU which would see the baseline for agreed standards rise if one side improves their safeguards. The two sides have yet to agree how these issues and others in the agreement should be enforced, with the EU demanding the toughest consequences for any British backsliding.

Boris Johnson’s foolish gambit of introducing an Internal Market Bill that threatens to breach the withdrawal agreement has increased the cost for Britain of a free trade deal in terms of governance. But his history of recklessness could prove useful in parliament if he signs up to a deal that would give Britain the freedom to diverge further from the EU but with catastrophic consequences.

Unlike other prime ministers, Johnson would have little difficulty persuading his Brexiteer backbenches that he is willing to choose the nuclear option. From proroguing parliament to removing the whip from senior Conservative MPs and introducing treaty-breaking legislation, he has done so many times since becoming prime minister.

Johnson can afford to make some last-minute compromises on the level playing field and governance, not least because few people understand them. Fishing is a different matter.

The Vote Leave campaign promised to take back control of Britain’s borders, money and laws but many Brexit voters see the restoration of sovereignty over British fishing waters as a measure of whether the country is really moving out of European control.

Under the Common Fisheries Policy (CFP) all EU member states’ territorial waters, or exclusive economic zones (EEZ), are managed as a common resource called EU waters. Every year, the EU determines a total allowable catch for each stock of fish – a species caught in a particular part of the sea – giving each member state a fixed share of each stock.

The EU’s opening position in the negotiations was that nothing much should change after Brexit, while Britain said it must control its 200km waters and would negotiate with the EU every year the extent to which European boats could fish there. Both sides have moved from those positions but Johnson cannot afford to agree to a deal that does not give British fishermen a big boost while asserting British sovereignty.

Much of Britain’s fishing industry is concentrated in the northeast of England and in Scotland, making it politically potent for the Conservatives. The northeast is an essential part of Johnson’s new electoral constituency and fisheries could play an important role in the debate over Scottish independence over the next few years.

If he secures much greater access to fishing waters for Scottish fishermen, Johnson will be able to argue that the Scottish National Party’s (SNP) promise to bring an independent Scotland into the EU will doom them to return to lower shares under the CFP.

If Johnson can agree a deal with the EU that includes a clear win on fisheries, he is confident that all but a handful of Conservative backbenchers will support it. Labour leader Keir Starmer is also preparing to support a deal, giving the prime minister a further cushion.

If there is a deal at the beginning of next week, Johnson can hold off on restoring the treaty-breaking clauses removed by the House of Lords from the Internal Market Bill. And his threat to include clauses in a taxation Bill next week to allow British ministers to decide unilaterally which goods going from Great Britain into Northern Ireland are at risk of moving into the EU single market and subject to tariffs would become moot if there is a deal guaranteeing tariff-free trade with the EU.