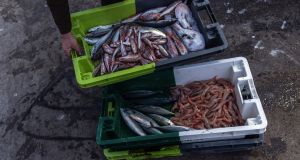 Irish fishery rights are central to the EU’s fraught negotiations with the UK on their post-Brexit relationship, Minister for Foreign Affairs Simon Coveney has said.

Speaking during a visit to Paris on Thursday, Mr Coveney stressed that while he is not negotiating with the UK, he has total confidence in the EU’s chief negotiator Michel Barnier. Both men are former agriculture ministers.

“I have spent many hours talking to Michel Barnier about fish, to ensure that he as our negotiator understands the vulnerabilities for Ireland of fish.”

The two men have gone through the fish numbers, stock by stock. “That’s the detail we’ve looked at this,” Mr Coveney said, “both across the pelagic species and the demersal white fish species.” Pelegic fish live and feed away from the bottom of the sea, away from shote, while demersal fish live on or near the bottom.

He noted the Irish fishing sector was worth €1.4 billion annually and supported 16,000 jobs, often in “parts of the country that have very, very little else.”

The EU sees it as a question of keeping coastal communities in work in an indigenous industry, communities like Castletownbere, Dingle, Greencastle, Killybegs, Kilmore Quay, Rossaveel and Unionhall, Mr Coveney said.

Britain, on the other hand, sees fishing in terms of sovereignty and “taking back control” which “makes it very emotive. It is a sort of populist nationalism, I suppose, linked to Brexit.”

Access to British waters is one of the last unresolved issues in negotiations, along with a “level playing field” for competition in trade, and governance, meaning who decides if rules are fairly implemented.

Mr Coveney rejects the notion of accepting financial compensation for the loss of fishing opportunities.

“Quite frankly, I am not interested in money. I am interested in fishing opportunities so that we have an industry that can provide jobs and a sustainable future for the fishing sector... Money doesn’t solve this issue.”

He acknowleged that countries without substantial fishing interests may be concerned that a deal could collapse over fish. “My response to that is we are not going to sell out the fishing industry or sell them short in an effort to get a deal in other areas. Fishermen are just as important as the tech industry or the banking industry or the services industry.”

The EU knows that access to British waters will diminish post-Brexit, but they want “a fair agreement on access and quota share, that recognises that many of these stocks are migratory stocks that actually swim between the two jurisdictions at different times in their growth path,” Mr Coveney said.

“What the UK have been trying to do is effectively label all fish caught in British waters as British fish that the EU are trying to hold onto after the Brexit transition period. I just don’t accept that way of defining the issue.”

Ireland and France both have “very significant” and “similar” interests in fishing, albeit in different stocks, which was one of the reasons Mr Coveney travelled to Paris.

The Minister said it would not be helpful for him to speculate on how a “middle ground position that both sides mightn’t like but that they can live with” might be reached. He hasn’t yet heard of a convincing solution, but he knows Mr Barnier is working hard on it in London. “I understand they were ordering in pizzas at 3 or 4 o’clock in the morning” on Thursday, he said.