Stricter measures come amid figures showing record level of 2,431 deaths in one week 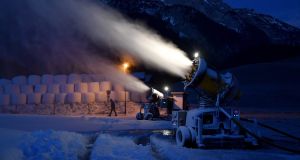 Snow cannons blow snow on the hills in the Abtenau ski resort in Austria: The slopes will effectively be open only to locals and day-trippers until at least the new year. Photograph: Barbara Gindl/APA

Austria is facing a very silent night this year as the home of the world-famous Christmas carol tightens border controls and restricts ski-slope access over the holiday period.

Austrian ski slopes will effectively be open only to locals and day-trippers until at least the new year, according to new rules, with no catering or accommodation allowed in resorts.

“Skiing is a sport that takes place in the open air, an individual sport,” he said. “Epidemiologically it must be assessed differently from gastronomy, where we know that there can time and again be infections.”

The Austrian leader denied the tighter ski rules were in response to pressure from other EU countries with ski resorts. France, Germany and Italy have been calling for co-ordinated action to keep slopes closed until mid-January. Meanwhile non-EU Switzerland has already allowed its winter sports season get under way.

Next Sunday sees the end of three weeks of lockdown measures in Austria that closed schools, theatres and non-essential shops and imposed a night-time curfew.

Instead, a new 10-day Christmas quarantine requirement applies for all arrivals from high-risk countries, except for those with a negative Covid-19 test taken within the previous 72 hours.

In Europe, only Ireland, Iceland and Finland are not in Austria’s “risk area” category of more than 100 cases per 100,000 population over seven days.

Austria’s new restrictions come as official figures on Thursday showed that the 2,431 deaths recorded in the last week of November was Austria’s highest weekly number of deaths since 1978.

As 2020 draws to a close, Tobias Thomas, head of Statistics Austria, described a 6.5 per cent increase in the total number of deaths so far this year compared to the average over the last five years as a “worrying development”.

Austria imposed a tougher lockdown in mid-November, when infections were running at 600 per 100,000 residents over seven days. Though the rate of new infections has dropped to 300, that is still twice the average rate in neighbouring Germany, which is operating a lighter lockdown.

Between now and Christmas, Austria is gearing up for a mass test of the population to trace – and isolate – as many asymptomatic Covid-19 carriers as possible.

Austria’s government said a goal of the quarantine requirement was to stop people travelling abroad over the festive season.

But Mr Kurz was widely criticised after suggesting during a press conference that foreign nationals in Austria, particularly those who visited family in the Balkans over the summer, were a major cause of the second Covid-19 wave.

Critics accused the conservative leader of sowing anti-immigrant sentiment while a television news anchor challenged him during a live interview on his claim, noting that 70 per cent of Austria’s Covid-19 infections are home-grown.

Across the border in Germany, regional leaders have agreed to extend their lighter lockdown measures until January 10th, with a 10-day amnesty for Christmas.

But in the eastern state of Saxony, where clinics are reaching capacity, the government has threatened a full Christmas lockdown unless infection numbers drop. While Germany’s seven-day incidence rate is currently at 134, Saxony is registering 267, according to the Robert Koch Institute (RKI), the country’s disease control body.

With 500 new deaths registered on Thursday, due in part to outbreaks in residential care homes, RKI president Lothar Wieler said “many more deaths” lie ahead.

“Too many people are still being infected,” he said. “The situation remains very tense.”