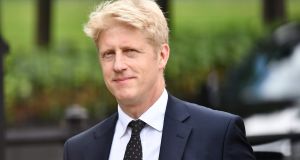 Jo Johnson, pictured in June quits as Tory MP and minister saying he is ‘torn between family and national interest’. Photograph: Ben Stansall/AFP

Jo Johnson, the British prime minister’s younger brother, has resigned as a junior minister and said he would also step down as a member of parliament, citing a conflict between family loyalty and the national interest.

His surprise resignation comes days after Boris Johnson expelled 21 Conservative MPs from the party for failing to back his Brexit strategy, including Winston Churchill’s grandson and a former finance minister.

Since taking office in July, the prime minister has tried to corral the Conservative Party, which is deeply divided over Brexit, behind his strategy of leaving the European Union on October 31st, with or without a deal.

Jo Johnson (47) had previously expressed backing for a second referendum on whether Britain should leave the EU, but accepted a job as a junior minister in the business and education departments when his brother became prime minister. “It’s been an honour to represent Orpington for 9 years & to serve as a minister under three PMs.” he said on Twitter. “In recent weeks I’ve been torn between family loyalty and the national interest – it’s an unresolvable tension & time for others to take on my roles as MP & Minister,” he said.

It was not immediately clear whether he would resign as a member of parliament immediately, or simply not stand for re-election. He had been an MP for the Orpington constituency in Kent, south east England, since 2010, serving in several ministerial roles.

The prime minister’s “do or die” Brexit strategy, and his hardline approach to enforcing it, is causing a realignment in the ruling party, with several senior, more pro-European members announcing they will not seek re-election.

In a speech in Wakefield on Thursday, the prime minister said his brother Jo “does not agree with me about the European Union because it’s an issue that obviously divides families and divides everybody”.

The Johnson family is notoriously split over Brexit with his sister Rachel having represented different parties opposed to Brexit, and his father Stanley being a committed Europhile and former European Commission official.

It is also not the first time Jo Johnson, a former Financial Times journalist, has caught the government by surprise with a resignation notice. Last year, he quit then-prime minister Theresa May’s government, calling in a withering critique for another referendum to avoid her Brexit plans unleashing Britain’s greatest crisis since the second World War.

Early on Thursday morning, the British government paved the way for proposals seeking to block a no-deal Brexit on October 31st to become law before parliament is suspended.

It’s been an honour to represent Orpington for 9 years & to serve as a minister under three PMs. In recent weeks I’ve been torn between family loyalty and the national interest - it’s an unresolvable tension & time for others to take on my roles as MP & Minister. #overandout

Lord Ashton of Hyde, Conservative chief whip in the Lords, announced the breakthrough following talks with Labour after a lengthy procedural battle threatened to run through the night.

He said all stages on the European Union (Withdrawal) (Number 6) Bill will be completed in the Lords by 5pm on Friday.

He added his House of Commons counterpart Mark Spencer has agreed time will be made for any amendments by peers to be considered on Monday.

It is unclear what led to a breakthrough given the government’s strong opposition to the Bill in the Commons.

The proposed legislation requires a delay to Brexit beyond October 31st unless a divorce deal is approved or parliament agrees to leaving the EU without one by October 19th.

The Bill cleared the Commons on Wednesday and Labour moved a motion in a bid to ensure it would be dealt with by peers by 5pm on Friday, before parliament is prorogued next week.

However, Labour’s so-called guillotine motion on the Bill faced stiff opposition, with more than 100 amendments being submitted by mainly Brexit-backing Tory peers.

Claims of filibustering were aimed at opponents of the motion, which involves deliberately wasting time during a debate by making overlong speeches or raising unnecessary procedural points – in a bid to talk out a measure and stop it from progressing.

But shortly before 1.30am on Thursday, Lord Ashton told peers: “I am pleased to say we’ve concluded our usual channels conversations and subject to confirmation by the leader of the Opposition we have agreed that the current business of the House motion will be adjourned today and a new motion will be tabled tomorrow to allow the Bill to complete all stages in this House by 5pm on Friday, September 6th.”

On Wednesday, Mr Johnson failed in his attempt to call a general election next month after most Opposition MPs abstained denying him the two-thirds majority he needed in a Commons vote – 298 MPs voted in favour of the motion under the Fixed Term Parliament Act, with 56 against.

Labour MPs abstained in the vote and party leader Jeremy Corbyn said he would only vote for a general election after the Bill seeking to block a no-deal Brexit becomes law. Mr Johnson mocked the Labour leader, accusing him of being afraid to face the voters.

“Forty-eight hours ago he was leading the chants of ‘Stop the coup, let the people vote’. Now he’s saying: ‘Stop the election and stop the people from voting’. I think he has become the first leader of the opposition in the democratic history of our country to refuse the invitation to an election. The obvious conclusion is I’m afraid is that he does not think he can win,”the prime minister said.

Earlier, MPs voted by 329 to 300 for the Bill obliging Mr Johnson to seek a three-month delay to Brexit if he fails to secure a withdrawal deal by October 19th.

Mr Corbyn accused Mr Johnson’s “undemocratic cabal in Downing Street” of aligning with the unelected House of Lords to block a bill approved by MPs.

He said he was eager for a general election but would not agree to it while the threat of a no-deal Brexit remained.

“A general election isn’t a plaything for a prime minister to avoid his obligations, to dodge scrutiny, or renege on his commitments. He has committed to renegotiate Brexit – but where is it? Where is the plan? Where are the proposals?” he said.

“If he has a Brexit plan – be it no-deal or this new mystery proposed deal we are yet to see any detail of – then he should put it before the people in a public vote, a referendum or a general election and seek a mandate from them.”

Mr Johnson said the Bill would give the EU control over the Brexit negotiations and the power to determine how long Britain would remain a member-state.

“I’m afraid the country must now decide whether the leader of the opposition or I go to Brussels on the 17th of October to sort this out,” he said. – Reuters and PA

1 Irish tourists excluded from visiting Greece as country begins its tourism season
2 Police officer ‘kicked in the face’ while clearing crowd from beach
3 Coronavirus: Nine more deaths reported in the Republic
4 Ireland enjoys hottest day of the year for second time this week
5 George Floyd death: Teenager dies in clashes as protests spread across US
Real news has value SUBSCRIBE