US Politics: A subtler leader would not seek confrontation with China and Europe at the same time 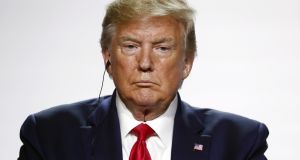 Among the oddities of Donald Trump’s negotiating style is his willingness to reveal his hand.

“All we have to do,” the US president said of the EU last week, “is tax their cars and they’d give us anything we wanted because they send millions of Mercedes over.” The wisdom of this tactic, which Niccolò Machiavelli did not find room for in The Prince, is questionable.

So too is his choice of opponent. Despite his singular focus on China, Trump has actually fallen out with Europe over a wider range of items. He resents what he sees as the military burden-shirking of Germany and other Nato members. He has threatened to “release” Islamic State members into France. Denmark rebuffed his bid to replay the 1803 Louisiana Purchase of the US midwest with Greenland.

In the first year or so of his presidency, it was common, and fair, to ask if Trump was a strategist or a man of raw impulse. Nothing has settled the debate like these tiffs with Europe. Strategy is above all the setting of priorities. An exponent of the craft would prioritise the showdown with China and press, cajole or incentivise the EU into a common front against it. To hit out at both suggests less a strategist than a player of whack-a-mole.

Even without Britain, the EU accounts for roughly 18 per cent of world output, placing it below America but above China on the podium of economic weight. It is a regulatory hyperpower whose rules help to influence those that govern global trade.

By dint of geography, it has a say in the precise extent of the infrastructure with which China hopes to knit together the Eurasian supercontinent. Its trade authorities were waging the “bra wars” against Beijing a full decade before Trump announced his presidential candidacy. Its companies could help fill the void left by an American corporate exodus from China.

The shame of it is that a subtler US president could shape the European line. As of March, the EU saw China as a “systemic rival”. Some of its members have hardened their view of China while others still see it as a commercial honeypot and nothing else. US diplomats understand the malleability (and indispensability) of Europe. They do assiduous work to harmonise its position with Washington’s. But they can only do so much under a president who chips away at transatlantic bonhomie.

Trump did not invent the rift with Europe. When the Soviet Union faded, so did the bonding agent that kept these two very different sides of the north Atlantic together. There have been schisms under each subsequent president. Even a “normal” US leader would have to respond to European efforts to tax, fine and sue American tech companies.

But a normal leader would not choose to enter a generational struggle with a third country as large as China. Once Trump did that, his options were limited. Europe became essential. Grievances with it had to be set aside for the sake of unity against the Asian challenger.

Worse than the fact of US-EU froideur is the underlying cause of it. If it were just a complaint about trade, of the kind Trump nurses against Japan and India, it could be finessed away. But appended to it is something more philosophical.

The president and those around him see the EU as an affront to the nation state, a mostly 19th-century invention that populists now talk about as the natural way of human affairs since our species became bipedal. They recognise that, just as the US sees itself as an unfolding experiment, so does the EU, and it is in some ways a more radical one.

Mike Pompeo’s speech in Brussels in December was telling. “Nothing can replace the nation state,” said the US secretary of state, “as the guarantor of democratic freedoms.” Whatever the truth of his claim, the fact that he believes it gives context to the sheer number and persistence of transatlantic splits in recent years. There is more to them than purely material gripes.

It took Trump to point out the flaws in the west’s approach to China, just as he pointed out the folly of open-ended military action and the GOP’s credulous faith in markets. Translating these one-time heresies into government has been the problem.

Increasingly, this appears to be his role in history: a talented pointer-outer of things. Acting on them requires a strategist. We will know the next president is one when he or she starts cultivating Europe. – Copyright The Financial Times Limited 2019