Scenarios include 10,000 job losses in tourism in months after no-deal 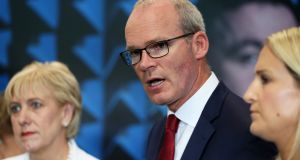 Simon Coveney said there would be ‘carnage’ in the fishing industry after a no-deal Brexit. Photograph: Brian Lawless/PA Wire

Ministers now believe that a no-deal Brexit will be significantly worse than they previously expected, with predictions of thousands of immediate job losses in tourism and “carnage” in the fishing sector, after discussions at Cabinet on Tuesday night.

Minister for Foreign Affairs Simon Coveney briefed his colleagues at the meeting, which ran for 4½ hours and included a lengthy discussion about no-deal planning.

Cabinet members were circulated with a document on the likely implications of no-deal, which was later collected from them, and which left several Ministers taken aback by the severity of the warnings.

They were told that 10,000 jobs in the tourism and hospitality industry were likely to be lost in the first three months after Brexit.

The implications for parts of the agri-food industry also shocked some of those present while Mr Coveney told the meeting that there would be “carnage” in the fishing industry after a no-deal, according to one person present.

Ministers were also told it was inevitable there would be some checks on goods imported across the Border but that those checks would not take place at the Border. When pressed by some Ministers for more details about the nature of the checks, Mr Coveney declined to elaborate – though there was some mention of mobile checks – but it is understood that discussions are taking place in Government Buildings about issuing more detail to the public, perhaps as early as next week.

Mr Coveney and Taoiseach Leo Varadkar stressed the importance of protecting Ireland’s place in the EU’s single market, which would require the checks be carried out in consultation with the EU.

“The checks will come,” one Minister said. “But telling people where they are will be awkward.”

One Minister said: “We’re going to have to level with people. It’s going to be a lot worse than people expect.”

Some sources expect that the Government will make further announcements about no-deal planning, including the likely checks on imports, next week in advance of the return of the Dáil the following week.

The Government says that it is in discussions with the European Commission about protecting the single market in the event of a no-deal, while maintaining an open border between North and South.