In 2011 there was just one food bank in Northern Ireland, today there are 23 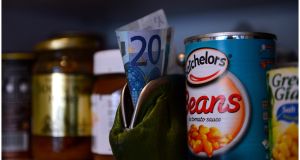 ESRI research shows an increase in trade tariffs could add between €892 and €1,360 to the annual cost of a basket of goods. Photograph: Bryan O’Brien

If the UK crashes out of the EU at the end of October without a deal it will have major implications for households on both sides of the Border through changes in the cost of living, employment, pay and government spending.

There is a real danger that the social and economic impacts of a no-deal Brexit will disproportionately hit low-income households. For those at risk of poverty and still carrying the scars of the last economic recession, it could have a particularly detrimental impact, unless sufficient safeguards are put in place.

Almost 19 per cent of the Republic’s population experiences basic deprivation, which means being unable to afford essentials such as heating, suitable clothing or nutritious food. While the rate has fallen in recent years, the levels of deprivation are almost twice as high as 2007. So a larger proportion of the population are now more vulnerable to the impact of an economic slowdown than in 2008.

We know Brexit, and in particular the chaos of a no-deal Brexit, presents a serious threat to both employment levels and wage growth

People are already struggling with rising housing costs, and a hard Brexit will add additional pressure to stretched household budgets. Research from the Economic and Social Research Institute (ESRI) shows that an increase in trade tariffs could add between €892 and €1,360 to the annual cost of a basket of goods. The impact on low-income households will be 70 per cent higher than on those in the highest income group due to the higher share of household expenditure on food and energy by lower income households.

Struggling to pay for fuel and food are two of the main reasons people seek help from charities and other bodies. The majority of these are households with children. Currently in Northern Ireland 85,000 children live below the poverty line and in the Republic the figure is 220,000. A key priority for policymakers should be how these children’s futures will be affected by Brexit, but it is rarely discussed.

Last week, data from the Central Statistics Office showed record levels of employment in the State with 2.3 million people now at work. But we know Brexit, and in particular the chaos of a no-deal Brexit, presents a serious threat to both employment levels and wage growth. The labour market impacts are difficult to predict, but it is expected that those in low-paid jobs, notably those in the agri-food sector, will be hit hardest. People living in Border counties, who are already experiencing higher levels of poverty, will be more exposed to the risk of unemployment and wage stagnation.

For households in Northern Ireland, the consequences will be even more severe. A report by the UK’s Department of the Economy published in July stated that if the UK leaves the EU without a deal there will be a “profound and long-lasting impact on NI’s economy and society”. It is estimated that up to 40,000 jobs could be lost. This predicted rise in unemployment could coincide with the introduction of universal credit, the controversial welfare reform that merges six benefits into one. It is estimated that approximately 40 per cent of households will be worse off under the universal credit scheme.

Analysis from the Institute of Fiscal Studies (2013) showed that Northern Ireland will be the worst affected by the introduction of universal credit when compared to other areas in the UK. This is because the North has a higher proportion of low-income households in receipt of means-tested benefits.

It is incumbent upon government, on both sides of the Irish Sea, to prevent poorer households from paying the price of a no-deal Brexit

The roll out of the scheme in some areas of the North began last year and has seen an increase in requests for help from households whose payment has been delayed or suspended. The scheme is due to be extended to all recipients in 2020. In some parts of England where the reforms have already been implemented, food banks have seen a 52 per cent increase in demand. In 2011 there was just one food bank operating in Northern Ireland, today there are 23. Therefore, at a time when people will be in greater need of social support, the safety net for citizens in the North will be significantly eroded.

Despite this pessimistic outlook, at the Society of St Vincent de Paul we believe that a rise in poverty isn’t inevitable. The right political choices can mitigate these detrimental impacts. In the immediate term it is important that minimum wages and social welfare benefits are benchmarked against the cost of living so that low income groups are not left struggling as prices rise. Continued regional investment is essential as well as key investments in education and training.

As we enter this uncertain time, it is incumbent upon government, on both sides of the Irish Sea, to prevent poorer households from paying the price of a no-deal Brexit.

Making the right investments now means we can be prepared for the challenges that lie ahead.