Retailers have plans to keep ‘bread on the table’ in hard Brexit, says Minister 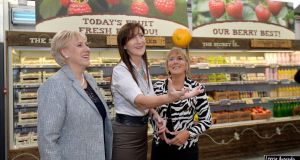 Supermarket chains and retailers are putting plans in place to ensure there would be “bread on the table” in the event of a no-deal Brexit, Minister for Business Heather Humphreys has said.

Ms Humphreys told reporters that the Government has been working with retailers to ensure there would be “as little disruption as possible to goods coming into this country.”

“I am satisfied that they will be able to deal with any issues,” she said.

The minister urged businesses at an event in Dublin to “grab the Brexit bull by the horns” and take steps to prepare for the United Kingdom’s exit from the European Union in a disorderly no-deal departure.

Speaking at the shop operated at the fruit grower and importer Keelings near Dublin Airport, the minister acknowledged that it was “extremely frustrating” for businesses that with just nine weeks to Brexit on October 31st when they did not know whether the UK would leave the EU with or without a deal.

“I fully accept that the lack of clarity complicates our Brexit contingency planning. I also accept that it is incredibly difficult for businesses, especially small businesses, to plan for a situation that remains so unclear,” she said.

The minister outlined again the range of Brexit-related Government supports to businesses including loans, at the publicity event but acknowledged the reluctance of businesses to take on debt in advance.

“That is understandable but I want to be very clear that you are under no obligation to draw down a loan if you apply for one,” she said.

Keelings sells between 10,000 and 12,000 of berries a year - roughly about 50 million punnets of fruit - and employs 2,300 people. It imports grows €30 million worth of produce on 500 acres in north Dublin and imports fruit from Egypt, Morocco, Mexico and Chile.

David Keeling, chief executive of Keelings Retail, said there may need to be “a lot more” consistent shipping routes directly to mainland Europe if the transit channel through the UK, currently the quickest, cheaper and most favoured route of importers, is delayed due to congestion at the English ports after Brexit.

“You would love to get the Government in with all the logistical companies and understand what’s happening and then find potential solutions in the short term if something serious happens,” he said.

He said there could be shortages of some food types immediately after Brexit but that he did not expect overall shortages, he said.

“It is not an easy thing to plan for,” he said.

His sister Caroline Keeling, chief executive of the Dublin family business, said that managing food checks on cross-Border supplies would be a “challenge” in a hard Brexit.

“There will be challenges that we haven’t thought about that will come out in November. If the attitude that is there at the moment - to try and fix everything - continues, I think we’ll get through it,” she said.