Johnson still has a way of getting October 15th election

Labour MP Tanmanjeet Singh Dhesi has been applauded in the House of Commons after he condemned a column written by Boris Johnson in which he described some Muslim women as "letter boxes." Video: UK Parliament TV 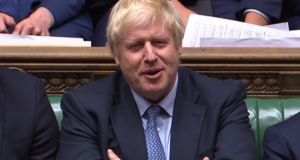 MPs on Wednesday night denied Boris Johnson the general election he continues to insist he doesn’t want, but Britain is still likely to go to the polls on the prime minister’s chosen date of October 15th.

Labour leader Jeremy Corbyn said he would vote for an election as soon as a bill seeking to rule out a no-deal Brexit comes into law.

Many Labour MPs want to delay any election until after October 19th, when the bill would require Johnson to seek an article 50 extension if he has not secured a Brexit deal. But with the Scottish National Party (SNP) taking the same approach as Corbyn, the prime minister will have no difficulty securing a simple majority for a one-line bill setting aside the terms of the Fixed Term Parliaments Act to call an election on October 15th.

Johnson’s first prime minister’s questions showed how he plans to frame the election as a choice between him and Corbyn to manage Brexit. He hopes to unite the coalition that voted for Brexit in 2016 and to capture Labour seats in Leave-voting parts of the midlands and the north of England.

Chancellor Sajid Javid’s spending review on Wednesday sought to neutralise some of the Conservatives’ weaknesses among Labour voters, promising to pump money into health, education, policing and social care.

Labour’s Tanmanjeet Singh Dhesi, who wears a turban, drew loud applause with a blistering attack on Johnson’s description of women who wear the burka as looking like letterboxes.

“For those of us who, from a young age, have had to endure and face up to being called names such as towelhead or Taliban, or to people saying we come from bongo, bongo land, we can appreciate full well the hurt and pain felt by already vulnerable Muslim women when they are described as looking like bank robbers and letterboxes,” he said.

Johnson said the column in which he used the words was in fact a plea for women to be allowed to wear the burka if they chose. But Liberal Democrat leader Jo Swinson said there was no justification for the use of such language in any circumstances.