PM criticised over expulsion of 21 rebels on Tuesday, while latest rebel Spelman is spared 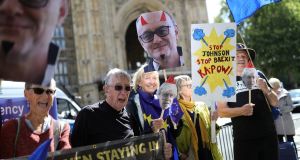 MPs have passed a Bill obliging Boris Johnson to seek a three-month delay to Brexit if he fails to secure a withdrawal deal by October 19th, with a former Conservative party chairwoman voting against the government.

Caroline Spelman joined was among 329 MPs to support the Bill, with 300 voting with the government against it, but Downing Street suggested that she would not lose the party whip.

An amendment backing a version of Theresa May’s withdrawal agreement was attached to the Bill after an apparent procedural mistake. As MPs started to vote on the amendment tabled by Labour’s Stephen Kinnock, deputy speaker Lindsay Hoyle ruled that because those opposed to the amendment had not put up any tellers, it was passed.

The Bill has now gone to the House of Lords, where pro-government peers have tabled dozens of amendments in the hope of delaying its passage until after parliament is prorogued next week.

At a meeting of the 1922 Committee of Conservative backbenchers on Wednesday night, the prime minister faced criticism for his purge of 21 rebels who voted against the government on Tuesday night. Mr Johnson reportedly blamed the chief whip for the move, which means none of the 21 will be allowed to stand as candidates for the party in the next general election.

Speaking in the debate on the Brexit Bill, former foreign office minister Alistair Burt said Conservatives should consider the consequences of expelling so many senior figures from the party.

“I say to my colleagues, if we are being purged now, who is next?”

Conservative Brexiteer Edward Leigh paid tribute to rebels including former chancellor of the exchequer Philip Hammond and veteran backbencher Nicholas Soames. And he expressed regret at the decision to strip them of the party whip and deselect them as candidates.

“The trouble with purges is that if one group of people is purged, another group of people might have to be purged when we try to push a deal through parliament,” he said.

Mr Burt said one of his reasons for seeking to block a no-deal Brexit was its potential impact on Ireland, which he said some MPs treated as an irrelevance.

“With our history in relation to Ireland and everything that happened there, it became our best friend in the European Union. Our choice to leave – our Brexit – has put Ireland in the most catastrophic situation of any country, and we now expect it to accept another English demand that it should do something. Have we no understanding of what that relationship means and the damage done?” he said.

Labour’s shadow Brexit secretary Keir Starmer said the current arrangements that maintain an open border in Ireland were crucial to the peace process.

North Down MP Sylvia Hermon said Mr Johnson should correct his statement last month to the effect that the Northern Irish backstop contravenes the Belfast Agreement. Brexit secretary Stephen Barclay said Mr Johnson was concerned about “the rule-taking element of the backstop, under which those in Northern Ireland will continue to take rules on which they will not have a say” and that it would undermine “the element of consent” from both parts of the community in Northern Ireland.

“The prime minister will discuss the issues around the alternative arrangements with the Taoiseach on Monday. That will build on considerable other interaction with the Irish Government – for example, I had a meeting with Simon Coveney in the Irish embassy in Paris last week, and the Foreign Secretary met him in the same week. There has been extensive contact with the Irish Government,” Mr Barclay said.