UK Politics: Remainers should make it their mission to shape Britain after EU exit 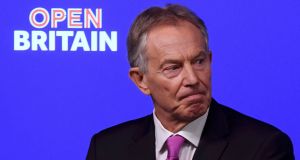 It goes some way to explain his restlessness that Tony Blair, who became Britain’s prime minister in 1997, is just three years older than Theresa May, who took the job last summer. You are a long time retired when you peak so young.

Blair uses these idle years to say perceptive things – about Europe, about the misuses of patriotism – that flop because he says them. Post-Iraq, post-crash, he is all insight and no standing.

In the 1980s, the Bee Gees were so tainted by disco they had to give some exquisite songs to other artists or watch them fail to trouble the charts. If there were other pro-European politicians of weight for Blair to advise from the wings, equivalents of Dionne Warwick and Diana Ross through whom to ventriloquise his talent, he would. There are none. So here he is.

Eurosceptics are right to smell an organised resistance. Open Britain, under whose auspices Blair spoke last week, is the official heir to the Remain campaign and its data. Friendships are growing on the sly between pro-European MPs in the Conservative Party, the Liberal Democrats and Labour. There are smart people and lots of money waiting to be deployed.

The question is to what end. The mission of Continuity Remain must be to shape Britain after exit, not to overturn exit. If this sounds meek, consider that it is possible to do the first job so thoroughly that, over time, it amounts to the same thing as the second.

We already know that Britain will opt back into Europol despite its formal departure from the EU. There is a good chance it will retain the European Arrest Warrant, which May defended as home secretary, and the Erasmus student-exchange scheme. One way or another it will have to observe the EU’s technical standards and product regulations, indefinitely and in most traded sectors.

If this extends to “regulatory equivalence” in financial services then, for a nation that has made a cult of formal sovereignty, Britain will still be up to its waist in the acquis. From there, the European movement that is currently taking shape could push for even deeper immersion.

Any break with EU labour laws would be a doddle to campaign against: trade unions and every non-Tory party of note would ask why British workers are held by their own government to deserve less protection than Germans or Swedes. No minister could use the so-called Henry VIII clause – which allows governments to avoid parliamentary scrutiny – to summarily repeal an EU law without a fight.

As for immigration, voters will not wear free movement but there is a world of difference between the alternative regimes being kicked around in government. Some near May dream of sectoral quotas informed by state assessments of labour needs. Avoiding this bureaucratic swamp for something elegant – automatic visas for anyone earning a certain amount, perhaps – must be the priority of organised pro-Europeans on the day after exit.

The same people could argue for more and more sector-by-sector opt-ins to the single market as time passes, even at the cost of EU budget payments; for the matching of European rules on state aid and environmental protection as they evolve; for foreign and defence policies to be made with Paris and Berlin on a safety-in-numbers basis, the better to withstand a revanchist Russia and a newly capricious America.

The idea is to keep post-exit Britain so enmeshed in the EU as to cast doubt on the wisdom – on the point – of remaining outside. There is more chance of Britain leaving and then rejoining in stages than there is of Britain never leaving in the first place.

The movement that Blair is willing into existence will not do its best work over the next two years but in the decade after that. It cannot stop exit, or even soften it. The people voted for a proposition. They want to see that proposition tested. If it tests badly enough, they will change their minds. But there is no way to skip a stage in the sequence. Brexit is an idea whose only effective rebuttal is its own implementation.

Once it happens, however, pro-Europeans can still salvage most of what they want. It is a matter of steering the evolution of British laws and institutions towards the EU norm, until the gap between membership and non-membership withers. This is not just possible, it is probable. The best argument against exit was never the steep downside so much as the measly upside.

Sovereignty is a dream: the gravitational pull of a unified Europe on our medium-sized nation is too strong. We know because we spent the middle of the last century finding out.