Trump leaves Theresa May with choice of diplomatic agonies 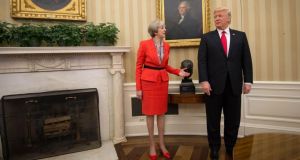 UK prime minister Theresa May and US president Donald Trump in the Oval Office. May “flew out of Washington on Friday an acclaimed stateswoman. By Saturday she was a case study in overpromotion.” Photograph: Stefan Rousseau/PA Wire

A certain kind of asset-rich, silver-haired Brexit voter escapes these winter months aboard intercontinental cruise liners, so it is proper that Theresa May, executor of their democratic will, turns out to have the same turning circle as one.

Britain has known worse prime ministers but few more ponderous. Her slow, terse response to Donald Trump’s new border laws was simultaneously a shock and just what you would expect from someone who seems to want written notice of inconvenient events.

What May lacks in speed she normally redressess through preparation. That diligence is no use to her here. Unless he is civilised by office, there is no such thing as a good plan for relations with the new US president, just a choice of agonies. She can either bet that Trump is too brittle to last, in which case she must wait him out, busying herself with the technical work of European Union extrication in the meantime; or she can assume his longevity and, with a heavy heart, cultivate him for the sake of a favour­able trade deal. The first way gambles with Britain’s commercial interests, the second with Britain’s reputation.

The third way – coaxing Trump into good behaviour – did not survive the weekend. Atlantic influence flows in the opposite direction. For all the excit­able literature devoted to American decline, a presidential whim was enough to scramble the internal politics of an important allied country overnight. May flew out of Washington on Friday an acclaimed stateswoman. By Saturday she was a case study in overpromotion. Split the difference between these overreactions and you have the truth: a solid interior minister still feeling her way as a head of government.

And a woman with half a point. When Britain voted to leave the EU for an Elizabethan destiny of external trade, it was almost by definition voting for a more transactional foreign policy. This is not a criticism, just a description of the logic of the vote. There is no way to replace full membership of a rich, vast and frictionless single market without subordinating all other diplomatic priorities to the pursuit of trade around the world. This implies a moral reticence towards lucrative markets that happen to have shabby political leadership or democratic imperfections.

May’s tongue-tiedness of recent days is an extreme version of compromises to come elsewhere. The nouns will vary but get used to sentences as stiff as “The United States is responsible for the United States’ policy on refugees”, enunciated with a glare by the prime minister in Ankara. Indeed, her audience with Turkey’s president Recep Tayyip Erdogan, which accompanied an arms contract for BAE Systems, was as telling as anything she did in the US. Her new department for international trade may become the “real” foreign office over time, until underworked diplomats start to evoke Christopher Hitchens’ weary line on the royals: things always have to be found for them to do.

If this is the future of Britain abroad, May must say so to avoid further surprises and the stain of hypocrisy. There is no disgrace in expedience. Her predecessor, David Cameron, ran a mercantile foreign policy that has dated better than his idealist spasm during the Arab spring. It is hard to read John Bew’s Realpolitik: a History without concluding that states return to self-interest less out of philosophic reflection than repeated muggings by reality. Britain was screened from the coldness of the world by the EU, which centralised trade negotiations, stipulated liberal norms as a condition of membership and provided a giant market that made access to, say, the US’s more of a nice-to-have than a great indispensable. We are naked now.

Liberal indignation is not a foreign policy. It has a downside (in burned bridges) and, what should matter more if the indignants are sincere, it can lack the upside of affecting change. It is not as if Cameron swayed Beijing by receiving the Dalai Lama in 2012. Ed Miliband, with his commitment to politics as a way of making yourself feel great, wants May to “get on the phone” to Trump and “tell him the ban cannot stand”. He always talked a good game as opposition leader. A prime minister has to calculate.

Britain can wait for Trump to self-destruct or abase itself before him. It just cannot hope to tame him or other potential trade partners through exhortation. Before the Europe referendum, liberals warned that a nation of 64 million overrated its leverage against world colossuses. Here is their vindication, and there is more where it came from. – (Copyright The Financial Times Limited 2017)