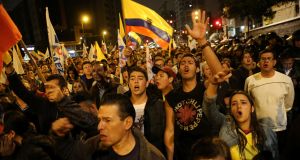 Ecuador’s socialist president Rafael Correa’s hand-picked candidate for Ecuador’s presidential election was leading the opening round of the poll, although it was uncertain whether he would get enough votes to avoid a run-off against his nearest rival.

With more than 81.4 per cent of polling stations reporting, ruling party candidate Lenin Moreno had almost 39 per cent of the votes, compared with just under 29 per cent for former banker and Creating Opportunities candidate Guillermo Lasso, Mr Moreno’s closest contender among seven opposition candidates.

Mr Moreno needed to win a majority of the total vote, or to have a 40 per cent share while holding a 10-point lead over his nearest rival, to avoid a run-off.

Mr Moreno was quick to declare himself the winner of the election based on inconclusive exit polls and called on Mr Lasso to recognise defeat.

He later softened his stance while addressing supporters late in the night, but still said he was confident he would cross the required threshold as results came in from consulates overseas and the western Manabi province, where the government spent heavily on construction after last year’s 7.8-magnitude earthquake.

“I have faith we’ll reach 40 per cent,” he said, before breaking into song.

Given the tight race, electoral authorities decided against announcing a quick count of results and appealed for patience as the official results came in.