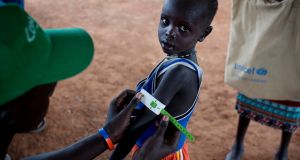 A boy has his arm measured to see if he is suffering from malnutrition during a nutritional assessment at an emergency medical facility supported by UNICEF in Kuach, South Sudan. Photograph: Kate Holt/UNICEF via AP

More than 100,000 people in South Sudan are experiencing famine, and millions are threatened by starvation if the international community fails to act soon, the United Nations has said.

Three UN agencies and the South Sudan government have officially declared the famine in Leer and Mayendit counties in Unity State, with a combination of war and drought having a devastating impact on those affected.

In recent months there have been warnings of famine in Yemen, Somalia and northeastern Nigeria, but South Sudan is the first country where one has been officially declared. It is also the first famine declaration made by the UN since 2011.

The famine classification highlights the human suffering caused by South Sudan’s three-year civil war, and, even as it is declared, President Salva Kiir’s government is blocking food aid to some areas, according to UN officials.

The aid agency Trócaire says the potential for disaster is comparable to what happened in 2011 in Somalia, where 250,000 people died from starvation.

“We will see this again if nothing is done,” the agency’s director of international programmes, Sean Farrell, told The Irish Times.

In a statement on Monday, the head of the Médecins Sans Frontieres (MSF) mission in South Sudan, Liz Harding, said: “In the past few weeks, MSF has encountered extremely high levels of malnutrition during our clinic in Mayendit county.

“If people cannot find a secure place to live, with decent access to safe drinking water, food, shelter and healthcare, the situation is unlikely to improve any time soon.”

He said it was estimated that 11,000 people had fled the famine to take refuge in Adior, and that unless they received help soon many would die from starvation.

“We normally begin to see the hungry season hit the areas that are under threat in June and July. People’s food starts to run out then, and they resort to picking berries and other desperate measures to survive,” he said.

“What is worrying now is that people’s food stocks are already depleted, their asset base has gone, and malnourishment is setting in. People are not dying from starvation yet, but the situation is critical.”

Mr Farrell said that not only was there a desperate need for food aid, but people also needed seeds to sow new staple crops for next year.

Poorly developed infrastructure in South Sudan was another obstacle that needed to be overcome, he warned. “We can get aid to people in a few weeks, but the logistics for South Sudan are very difficult. Out of 1,700km of roads in the country, only 350km are paved,” he said.

The UN has estimated that as many as five million people in South Sudan are threatened by starvation, although unlike Unity State other regions have not been classified as official famine areas.

Last week, the UN’s World Food Programme warned that more than 20 million people may face starvation in a series of famines across Africa over the next six months.

It is not the first time South Sudan has experienced starvation. When it fought for independence from Sudan in 1998, the territory suffered from a famine spurred by civil war.

Anywhere from 70,000 to several hundred thousand people died during that famine.

But Monday’s declaration of starvation is solely South Sudan’s creation, and a UN official blamed the country’s politicians for the humanitarian crisis. “This famine is man-made,” said Joyce Luma, head of the World Food Programme in South Sudan.

“There is only so much that humanitarian assistance can achieve in the absence of meaningful peace and security.”