Trump and Le Pen can be beaten with patience and discipline

Politics: Liberalism will prevail if its leaders act more like Tony Blair than Justin Trudeau 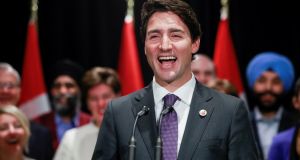 Liberals worldwide met Donald Trump’s recent border bans with principled opposition, practical help for the victims and the occasional lapse into nonsense. Consider the Bathtub Fallacy, a staple of educated opinion for too long.

Whenever the state imposes a counterterror measure, especially one as brute as the US president’s, statistics are dug out to show that fewer westerners perish in terror attacks than in everyday mishaps. Slipping in the bath is a tragicomic favourite. We chuckle, share the data and wait for voters and politicians to see sense.

For good reason, that epiphany never happens. Leaving aside the many curbs on freedom that governments enforce to prevent accidents – product regulations and tort laws, we call them – most people can intuit the difference between domestic misfortune and political violence. The latter is an assault on the system: the rules and institutions that distinguish society from the state of nature. Bathroom deaths could multiply by 50 without a threat to civil order. The incidence of terror could not.

If the lawyers who volunteered to help unjustly detained arrivals at American airports showed liberalism at its best, the elision of terror with slippery porcelain is liberalism at its eye-rolling, clever-clever, unserious worst. In the coming years, reasonable people have to oppose populists while taking immense care in how they oppose them. Voters are watching. If they come to see a choice between demagogues who push security and national cohesion to paranoid extremes and liberals who take these things too lightly, the liberals should just forfeit the next few electoral cycles to save time and ballot paper.

The most insidious art in politics is the steering of one’s opponent into fringe positions, almost without their knowledge. Leaders of the Third Way, Tony Blair in Britain, Bill Clinton in the US, did it by holding the centre so greedily that their adversaries had nowhere to go but their ideological comfort zones. Boxers call it “cutting off the ring”.

Today, populists do it through their own extremism. They bet on it being enough to incite liberals into righteous overreaction, and then on voters to favour rightwing stridency over the opposite kind. The first bet looks promising so far, the second seems a sure thing.

This does not call for total intellectual capitulation to the other side. There is little electoral need, and much less virtue or dignity, in the parroting of alt-right dogma by people who correctly abhor the stuff. But liberal politicians will need to at least hold the hawkish line – on national security, crime, welfare dependency – that took them into office in the very recent past, and harden it on migration. At a time when the authoritarian provocation is so great, when the natural reflex is to redouble one’s liberalism in defiance of the zeitgeist, this will be some feat of strategic discipline.

It is one that celebrates internationalism and human diversity as ends in themselves. For anyone who owes their life or livelihood to the west’s openness to outsiders, it is stirring to behold. But if it comes to define the official alternative to populism, if it crowds out hardheadedness on matters of security and identity, it will fail.

Liberalism wins only when it is dunked in molten steel. Before Blair became code for transnational looseness, he stood for vigilance to crime, terror and, more contentiously, rogue states. The coming wave of anti-populist leaders will have to resemble him at his peak much more than Canada’s prime minister and dreamboat of cosmopolitan piety, Justin Trudeau.

This is what the marchers and the venting celebrities should consider: not the futility of their efforts, but their inadvertent potential to drag politicians of goodwill into ideas and rhetoric that only sell in the most progressive jurisdictions.

Of course, the ultimate problem with the Bathtub Fallacy is its fallaciousness, not its repellence to voters. It is wrong on its own terms. But logic can wait. Politics matters more. Trump, Le Pen, the British rightwinger Nigel Farage: there are no giants or geniuses here. They are beatable with patience and discipline. It would be worse than ironic if, in their efforts to de-liberalise the west, they made their opponents more liberal than they ever were before, than is sensible, than is electable.