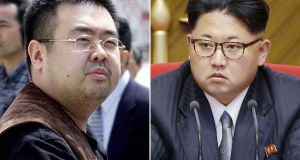 The assassination of North Korean leader Kim Jong-un’s estranged half-brother has escalated into a major political row, with Pyongyang’s envoy saying Malaysia cannot be trusted to investigate the death and with South Korea describing the assassination as a “terrorist act”.

Kim Jong-nam (46), the eldest son of late former leader Kim Jong-il, was killed at Kuala Lumpur airport a week ago after two Asian women wiped his face with what is believed to be a fast-acting poison as he was about to leave for Macau, a Chinese territory where he had protection.

Malaysia’s prime minister Najib Razak said his government’s investigation of the killing of Kim Jong-nam would be “objective”.

“We have no reason why we want to do something to paint North Korea in a bad light, but we will be objective,” Mr Najib told reporters in Kuala Lumpur.

Closed-circuit footage of the incident shows two women approaching Mr Kim, appearing to grab him and hold something to his face, then walking off in different directions. Mr Kim was then seen asking airport officials for help. He died in an ambulance shortly afterwards.

Malaysian police are hunting for four North Koreans who flew to Dubai on the day of the attack, having already detained one North Korean man, a Vietnamese woman, an Indonesian woman and a Malaysian man.

In response, Malaysia on Monday recalled its ambassador to Pyongyang over what it called the “baseless” accusations.

South Korea is also taking a firm line, with acting president Hwang Kyo-ahn calling for international co-operation to make North Korea “pay a due price for its terrorist act”.

The results of a postmortem on Kim Jong-nam could be available on Wednesday.

Although Mr Kim was the eldest son of Kim Jong-il, and was once viewed as heir apparent, he fell out of favour with his father for attempting to enter Japan with a fake passport in 2001.

“The incident effectively means that the North’s leader has removed the last remaining figure who can challenge his power,” Kim Keun-sik, a professor at Kyungnam University, told South Korea’s Yonhap news agency.

In 2010, he told Asahi TV in Japan that he was “against third-generation succession”.

“The assassination must have been ordered by Kim Jong-un. He might have viewed his half-brother as a stumbling block to his move to take a full control of the power,” said Moon Sung-mook at the Korea Research Institute for National Strategy.

The killing is threatening to isolate North Korea still further, as Malaysia is one of its few allies and its most important backer, China, is already angry about the North’s aggressive nuclear programme, which saw two nuclear tests since early 2016 and a missile launch last week.

While ideological allies North Korea and China have long been “as close as lips and teeth”, and China backed the North in the 1950-53 war, China has been wrong-footed by the North’s nuclear tests.

China’s Global Times newspaper dismissed as “ludicrous” western speculation that the sanction was because of the assassination attempt but the newspaper, which often expresses views close to those held in the ruling Communist Party, was sharply critical of the weapons programme, and urged the North to desist.

However, it was also careful not to go too far in criticising the North.

“Despite participating in UN sanctions, Chinese society’s friendship to the North remains unchanged. Chinese sanctions only target at its nuclear weapon programme, and we are firmly opposed to Seoul’s political fantasy against Pyongyang,” it said.