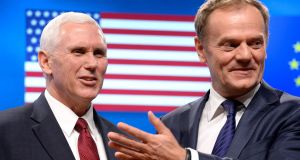 Mike Pence and Donald Tusk: The US vice-president and the president of the European Council had a “cordial and constructive meeting” in Brussels on Sunday. Photograph: Thierry Charlier/AFP/Getty Images

US vice-president Mike Pence, has attempted to mend fences with European leaders by pledging support for the EU following hostile comments from president Donald Trump and his supporters.

On his first visit to Brussels since assuming office, Mr Pence said on Monday that the new administration wanted to work in partnership with the EU. “It is my privilege on behalf of president Trump to express the strong commitment of the United States to continued co-operation and partnership with the European Union, ” he said.

“Whatever our differences, our two continents share the same heritage, the same values and, above all, the same purpose: to promote peace and prosperity through freedom, democracy and the rule of law. And to those objectives we will remain committed.”

The Republican’s emollient tone was in sharp contrast to the enthusiasm for Brexit shown by his boss in the White House. Mr Trump welcomed Brexit and has said that more countries will leave the EU, which he recently described as “basically a vehicle for Germany”.

The head of the European council, Donald Tusk, welcomed Mr Pence’s words, but challenged the Trump administration to put its promises into practice.

Mr Tusk, describing himself as an “incurably pro-American European” who was “fanatically” devoted to transatlantic ties, told reporters he had been frank with Mr Pence, because having heard “many new and surprising opinions” no one could pretend nothing had changed.

Still, Mr Tusk voiced optimism, after hearing what he described as Mr Pence’s support for an international order governed by law, not force, security co-operation and the integrity of the EU.

“In reply to these three matters,” he said, “I heard today from vice-president Pence three times ‘yes’. After such a positive declaration, both Europeans and Americans must simply practise what they preach.

“The reports of the death of the West have been greatly exaggerated,” Mr Tusk added. “Whoever wants to demolish that order, anticipating a post-West order, must know that in its defence we will remain determined.”

An EU source described the encounter between Mr Tusk and Mr Pence as a “cordial and constructive meeting that lasted longer than foreseen”.

Mr Pence, a former governor of Indiana, is on the final leg of his first visit to Europe since becoming vice-president in January. At the Munich security conference on Saturday, he criticised European countries for not meeting Nato defence spending pledges, a blunt message aimed primarily at Germany, France and Italy.

He did not mention the EU in Munich, an omission remedied on Monday with a series of meetings in Brussels. As well as meeting Mr Tusk, Mr Pence saw the EU foreign policy chief, Federica Mogherini, and the head of the European commission, Jean-Claude Juncker. He will round off the day with a potentially tricky visit to the head of Nato, Jens Stoltenberg.

Large parts of Mr Pence’s public speaking notes, laden with references to shared values and heritage across the Atlantic, could have been written by his predecessor, Democrat Joe Biden. But he made clear that Mr Trump intended to “search for new ground” with Moscow, though insisting that the US would continue to hold Russia accountable for enforcing the Minsk ceasefire.

His comments are unlikely to dispel the concerns of many EU leaders, who have been alarmed by Mr Trump’s cheerleading for Brexit and travel ban on people from seven mainly Muslim countries.

Shortly before taking office, Trump predicted that more countries would follow the British example and choose to leave the EU. In an interview with Brexit campaigner and Conservative MP Michael Gove, the president also described the bloc as “basically a vehicle for Germany”, adding “that’s why I thought the UK was so smart in getting out”.

The man tipped as his preferred choice as ambassador to Brussels, Ted Malloch, has suggested that the EU may need “a little taming” and claimed that the euro will collapse in 18 months. The European Parliament has urged European leaders to block his appointment. Mr Malloch is yet to be confirmed as Trump’s choice.

Mr Trump is expected to meet several EU leaders at the G7 summit in Italy in late May, and Brussels insiders think he may add on a meeting in the EU capital.

EU leaders have taken differing approaches to Mr Trump. French president François Hollande and German chancellor Angela Merkel have criticised his travel ban, but leaders in central Europe, such as Hungary’s Viktor Orbán and the ceremonial president of the Czech Republic, Milos Zeman, have voiced approval of the president’s policy.

In Britain, prime minister Theresa May has highlighted the importance of the UK’s “special relationship” with the US as Britain seeks a post-Brexit trade deal.