Janan Ganesh: Theresa May will regret her gung-ho approach to Brexit

British PM has not prepared ground for getting a bad deal from EU, and will pay price 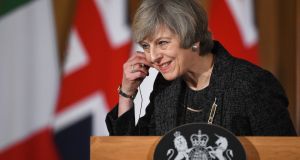 Theresa May: could have got her excuses in early. Photograph: Facundo Arrizabalaga/EPA

There will be no eleventh-hour conversion or legal intercession. Next month, Theresa May must table article 50 and start Britain’s withdrawal from the EU. The people will it, as does her Conservative Party and a Eurosceptic movement that takes a “trust but verify” approach to a prime minister who joined its cause only when to do so was opportune. She can do no other.

All the same, she will come to wish that she had been more sombre about it. No politician was better equipped, by voting record and temperament, to serve as the reluctant but dutiful executor of last year’s referendum result, working for good exit terms while preparing voters and MPs for much worse.

Had she welcomed parliament’s involvement and fronted up about the probable difficulty of the negotiations, there would be less pressure on her to strike a miracle deal and more goodwill from the vanquished 48 per cent of voters.

As it is, the impression is of a prime minister itching to begin the most complex project undertaken by the modern British state outside of total war as though it were an overdue holiday.

Her legal resistance to a parliamentary vote before article 50, the terse 137-word Bill she subsequently conceded and her lapses into asinine jingoism (she wants a “red, white and blue” exit) have raised expectations by framing the talks as a doddle that only the unaccountably pessimistic would wish to put off.

Fear for her if those expectations are dashed. She cannot bring back a bad deal (or no deal) in 2019 and count on a “hard luck” and a rueful pat on the back for her efforts. The ground has not been prepared that way. There will be recriminations and her present swagger will date hideously.

She should worry about the confidence that shines from the eyes of Eurosceptics, who cheered the House of Commons’s recent permission for article 50 as though the actual talks will be the easy bit. She should worry that only a third of voters support, as she seems to, an abrupt departure from the EU if no satisfactory settlement is agreed. This is before any material cost to exit has registered with them.

May is both invincible and frail. She could hold power for a decade, or two more years. If it is hard to picture the second scenario, remember that every prime minister since Margaret Thatcher lost their credibility in one go, not in stages: John Major after Britain’s disorderly exit from the exchange rate mechanism, Tony Blair after the Iraq War soured, Gordon Brown when he ducked a snap election and David Cameron on the morning of the referendum loss.

In each case, the prime minister was purring along tidily until the moment authority drained out of them. The event can be trivial (Brown’s) or inherited from a predecessor (Major’s), but the effect is no less unforgiving for that. Failure to return from Brussels with an advantageous agreement, having talked such a good game, having shown such impatience to start the process, would match in impact all of the listed ignominies other than Iraq.

In normal times, the second-largest party in parliament constitutes the opposition to the prime minister. Since the Labour Party’s abdication from competitive politics, sterling has done the job by diving whenever May talks up a clean break from the single market. As of next month, when she files the paperwork to commence exit talks, the source of opposition will move to the rest of the EU.

By giving her an adverse deal or running down the clock, they can do more to end her career than anyone in Britain. It should not console her much that her personal prospects are neither here nor there to other heads of government.

May has bet her reputation on a brisk, fruitful negotiation in a way she never had to, in a way she was uniquely qualified not to. She could have been candid with domestic audiences about the EU’s negotiating heft, its strategic incentive to make exit look unattractive to other member states and the fact that French, Dutch and German elections will give her less time to negotiate than is formally allotted.

She could have sought more, not less, parliamentary involvement to bind the whole political class into the process. She could have toned down expectations, making the most of her past as a nominal Remainer instead of overcompensating for it. In short, she could have got her excuses in early.

Instead, she has left herself exposed to the outcome of a diplomatic process that has no historic precedent. We should credit her appetite for the risk, if we could be sure she was aware of it.