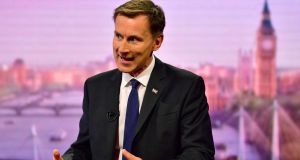 Conservative leadership candidate Jeremy Hunt has hardened his position on Brexit, saying he would leave the EU without a deal even if it destroys businesses and threatening to withhold part of Britain’s £39 billion divorce bill.

Mr Hunt, who is trailing Boris Johnson in polls of Conservative members, said if there was no prospect of a deal by the beginning of October he would back a no-deal Brexit on October 31st.

“I would do it with a heavy heart because, precisely because of the risks. But, you know, if you choose someone who has got a better chance of negotiating a deal then you’re not going to have to face that decision,” he told the BBC’s Andrew Marr Show.

Earlier, Mr Hunt told the Sunday Times that he expected the EU to give ground in negotiations with Britain in order to avoid a no-deal Brexit. And he joined Mr Johnson in calling into question Britain’s obligation to pay £39 billion to the EU in the event of a no-deal Brexit.

“Anyone who thinks I am going to write a blank cheque to the European Union is sorely mistaken. As a businessman I always paid my bills. That being said, if we leave without a deal I will not hand over a penny more than is legally required of us.”

Mr Johnson has threatened to suspend the £39 billion divorce bill “in creative ambiguity” until the EU agrees to change the withdrawal agreement. He refused on Sunday to rule out suspending parliament to force through a no-deal Brexit against the will of MPs, although he said he did not like the idea.

“I’m not remotely attracted to it, but you know MPs have got to understand it’s their responsibility to get this thing done, and that was by far the best solution.

“I don’t want to prorogue parliament nor do I expect to. I don’t think that’s going to be necessary, and I think that it’s far more important that MPs focus on where we are.

“Because politics has changed since March 29th, and people can see than unless we get Brexit done there is going to be a continuing haemorrhage of trust and of confidence in my party and Labour as well.”

Two senior allies of Jeremy Corbyn clashed on Sunday over Brexit as the Labour leader came under pressure to back a second referendum and promise to campaign for Remain.

Shadow chancellor John McDonnell said Labour needed to move now to change its policy, and expressed frustration at its failure to do so. However, Unite leader Len McCluskey said Labour supporters should trust Mr Corbyn and not seek to push him into an early decision on the policy.

“There is no panic, there is no panic to do anything. Let Jeremy Corbyn consult,” he told the BBC. “My message to Labour MPs and members is he’s done okay so far. Let’s trust him to consult and see what emerges.”

Mr Corbyn has called for an investigation after the Times reported that two civil servants had said he was too frail to be prime minister. The Labour leader said he was fit, healthy and active, and described the report about his health as a farrago of nonsense.

“There must be an investigation into which senior civil servants are spreading fictitious information to the press, and in the process compromising the integrity of the civil service.”

‘It has to stop’: Republican Georgia election official lashes out at Trump 09:05
Alleged ‘bribery for pardon’ scheme at White House under investigation 07:45
‘Recovery for everybody’ pledged by Biden as economic team unveiled 22:22
US attorney general says fraud not found that would have tipped election 21:33
Dozens of Tory MPs rebel against government on Covid restrictions 20:07