Explainer: What is the demilitarised zone?

Donald Trump has become the first sitting US president to enter North Korea after he briefly crossed the border in the demilitarised zone between South and North Korea. Video: Reuters 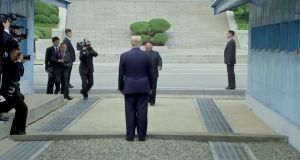 US president Donald Trump held talks with North Korean leader Kim Jong Un in the Demilitarised Zone (DMZ) between the two Koreas on Sunday, the third meeting between the two leaders in just over a year.

The world’s last Cold War frontier has seen a spate of dramatic diplomatic and military incidents over the years, as well as dozens of rounds of government, military and humanitarian talks since 1971, when the two Koreas opened their first hotline and liaison offices.

Most infamously, axe-wielding North Korean soldiers in the DMZ in 1976 murdered two US soldiers who were cutting down a poplar tree to secure a clear view.

Here are some facts about the 250 km-long DMZ, which separates North and South Korea.

* The DMZ marks where the 1950-53 Korean War - when China and North Korea battled UN forces led by the United States - ended with an armistice, not a treaty.

* The DMZ is a 2km-wide buffer, stretching coast to coast across the peninsula, lined by both sides with razor wire, heavy armaments and tank traps.

* Inside the DMZ is a Joint Security Area (JSA). The so-called peace village of Panmunjom, where the armistice that halted the Korean War was signed in 1953, is located in the 800-metre-wide and 400-metre-long JSA zone.

* A Military Demarcation Line (MDL) marks the boundary between the two Koreas.

* Panmunjom is a cluster of distinctive bright blue buildings. The two Koreas have their own liaison offices and conference halls, on each side of the MDL in Panmunjom.

* Under a 1953 deal, the U.N. Command and the North Korean military were allowed to dispatch no more than 35 troops to the JSA, and each of them can only possess one pistol or non-automatic rifle. But the number of soldiers and weapons increased as relations worsened.

* The troops face each across the MDL in Panmunjom.

* The first inter-Korean summit in more than a decade was held in Panmunjom last year.

* After a third summit between the two Koreas in September, the two sides withdrew firearms from the JSA and cut the number of troops back to the original 35.

* Vast stretches of the DMZ have been no-man’s land for more than 60 years, where wildlife has flourished undisturbed. Other parts of it offer an unsettling mix of military installations and tourist attractions.

* South Korea estimates the North operates about 160 guard posts along the DMZ and the South has 60. They demolished 11 of them from each side after a military deal last year.

* The DMZ is also littered with landmines planted over the decades - as many as 970,000 in the southern part alone, according to Landmine and Cluster Munition Monitor, a Geneva-based civic group.

* For years, both sides blared propaganda broadcasts over the DMZ into each other’s territory. The broadcasts ended after last year’s military agreement. – Reuters