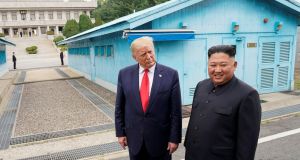 Donald Trump has become the first sitting US president to visit North Korea after crossing from the demilitarised zone that divides the Korean Peninsula, in a historic move during his third encounter with North Korean dictator Kim Jong-un.

Mr Trump stepped over the border and posed for photographs with Mr Kim on Sunday before the pair crossed back to the South Korean side of the DMZ minutes later.

“I didn’t expect to meet you at this place,” Mr Kim said after Mr Trump stepped over the border into North Korea. “We should shake off history and move forward to the future.”

“Big moment,” said Mr Trump, who added it was an “honour” to cross the border.

The two leaders then had their first meeting since February, when they held a summit in Hanoi that collapsed after they failed to agree on the path to denuclearisation, which Mr Kim had pledged to complete during their landmark first meeting in Singapore.

After an almost hour-long discussion on Sunday, the US president signalled the resumption of nuclear talks. He said teams from both sides would start working over the next two to three weeks. “We are not looking for speed, we are looking to get it right,” he said.

The meeting was orchestrated at short notice after Mr Trump on Saturday tweeted an invitation to the North Korean dictator to meet him in the DMZ during a visit to South Korea. But US officials had done some preparatory work in case of a possible meeting.

The leaders had also exchanged letters in recent weeks, adding momentum to a process that had ground to a halt. The Hanoi summit collapsed after Mr Trump refused to ease sanctions until Mr Kim abandoned his entire nuclear programme. But, on Sunday, he suggested the possibility of taking the more incremental approach desired by Mr Kim.

“The sanctions remain, but at some point during the negotiations things can happen,” Mr Trump said after his meeting with Mr Kim.

Mr Trump met Mr Kim even though Pyongyang recently tested several short-range ballistic missiles – the first such move since 2017. He had played down the tests – contradicting his own officials – in an effort to maintain his relationship with Mr Kim.

Sue Terry, a former CIA North Korea expert, said one positive result was the fact that Mr Trump said Mr Kim had agreed to designate a team to negotiate with Steve Biegun, the US’s North Korea envoy. “Thus far the Trump-Kim bromance acted as an impediment to making progress, because Kim wanted to only deal with Trump,” she said.

One key question was whether Mr Trump had altered his position that Mr Kim must abandon his entire nuclear programme to get sanctions relief, Ms Sherman said: “If Putin, MBS, Xi, Erdogan are precedent, Trump gave but didn’t really get anything.”

While many experts criticised the meeting as a photo op, others said it was better for the two leaders to meet, given the tensions that existed two years ago when Mr Trump was threatening Pyongyang with “fire and fury” as Mr Kim tested long-range missiles.

“It is really hard to change the fundamental dynamic and change the nature of the relationship,” said John Delury, a North Korea expert at Yonsei University in Seoul. “That is an essential part of this equation, and it is not easy to do.”

Mr Trump’s visit to the DMZ came 69 years after Harry Truman ordered US troops to Korea. It was also the first time a US leader visited the area with a South Korean president. Mr Trump was accompanied by Moon Jae-in, who said a handshake between Mr Trump and Mr Kim “would be a significant milestone in the peace process”.