Trump antagonises environmentalists and criticises US security alliance with Japan 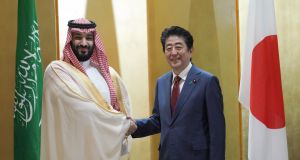 No G20 summit would be complete without the final communique, a diplomatic art form designed to paper over the cracks exposed during the previous two days. Prime minister Shinzo Abe of the host nation Japan pleaded in the document to find “not differences but common ground”.

In the end, however, there was no hiding the deep divisions on free trade, open borders or climate change in a sprawling grouping that represents two-thirds of the world’s population and more than 80 per cent of its economic output.

The differences were starkly highlighted by Russian president Vladimir Putin’s smirking performance with US president Donald Trump and his repeated attacks on western liberal values.

“The liberal idea has started eating itself,” Putin told reporters on Saturday.

Trump dominated the event, from his pre-departure threats to expand his trade war to China and India to his apparently off-the-cuff invitation to Kim Jong-un – promptly accepted by the North Korean leader – to come and “say hello” on the Korean DMZ.

In between, Trump joked with Putin about Russian election meddling and lavished praise on Saudi Crown Prince Mohammed Bin Salman, widely believed to have been behind the murder of Washington Post journalist Jamal Khashoggi last year.

The US president also again infuriated environmentalists by refusing to commit his government to the Paris climate deal.

America was the only G20 member not to agree to recommit to the “irreversibility” of the landmark treaty, signed in 2015.

In the end, Trump called a truce on plans to impose more punitive tariffs on Chinese products. Relations with China are “right back on track”, he pronounced, following his much-anticipated meeting with President Xi Jinping yesterday.

The truce will likely be welcomed by world markets, yet it is not clear if it will hold. Trump’s pledge to back off from imposing a 25 per cent duty on another $300 billion of Chinese goods may help defuse the spat between the world’s two biggest economies but existing tariffs will remain. Experts warned that talks could quickly break down over details.

After his meeting with the American president, Xi recalled two generations of bilateral ties and said, “One basic fact remains unchanged: China and the United States both benefit from co-operation and lose in confrontation.” He added: “Co-operation and dialogue are better than friction and confrontation.”

Trump’s disdain for alliances, meanwhile, again knocked America’s supposed friends off their stride. Before leaving for Osaka, he reiterated his attack on Germany as a “security freeloader” and mused on the unfairness of America’s security alliance with Japan. “Japan doesn’t have to help us at all” if the third World War breaks out, he said.

Japanese officials view the criticism as a negotiating tactic designed to prod it into shouldering more of the alliance. The treaty, signed in 1951, obliges the US to defend Japan if it is attacked. Japan has no such commitment.

Yet it was on climate change where Trump most starkly revealed G20 divisions – and hypocrisy.

There was face-saving language about the US commitment to “environmental protection” to solve what UN secretary-general Antonio Guterres last year called humanity’s most important issue. But there was no mistaking the whiff of Trump’s philosophy in the criticism of the Paris treaty that it “disadvantages American workers and taxpayers”.

The G20 states collectively account for 79 per cent of global greenhouse gas emissions. Yet, the same nations have tripled subsidies to the coal industry in recent years, according to a recent report by the Overseas Development Institute, a British think tank.

“This includes support through a wide range of instruments to prop up coal production, coal-fired power production,” said the report, which warned that its figures are likely to “significantly underestimate” the actual amounts of subsidies provided.

Japan, which is reeling from the impact of Fukushima on its energy policy, is the world’s third-largest financial supporter of coal, despite an unequivocal promise to reduce the use of fossil fuels from Abe last year. “Climate change can be life-threatening to all generations,” he said. “We must take more robust actions.”

The G20 final communique may not be the best place to test such commitments.