Donald Trump has become the first sitting US president to enter North Korea after he briefly crossed the border in the demilitarised zone between South and North Korea. Video: Reuters 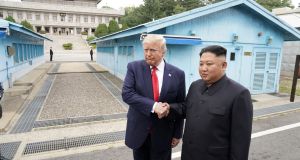 Donald Trump became the first sitting US president to set foot in North Korea after briefly crossing the border in the demilitarised zone after shaking hands with North Korean leader Kim Jong-un.

Mr Trump hailed ties with Mr Kim and invited him to the White House in their third meeting, which the US president initiated in a tweet on Saturday.

Mr Kim said he was “surprised” by Mr Trump’s request to meet, and called the US president’s short walk into North Korea “a very courageous and determined act”.

“Stepping across that line was a great honour,” Mr Trump said.

“It’s just an honour to be with you,” the US president said later in a meeting with Mr Kim, adding that his willingness to meet on short notice “made us both look good”.

“The relationship that we’ve developed has meant so much to so many people,” the US president said.

While Mr Trump has met Mr Kim twice at summits in Singapore and Hanoi, no US president has ever met a North Korean leader in the DMZ.

In the US, however, candidates running for the 2020 Democratic presidential nomination criticised Mr Trump’s latest overture to the North Korean leader, saying the DMZ meeting lacked substance and elevated a ruthless dictator.

Mr Trump had made his audacious invitation to the North Korean leader in a tweet on Saturday during meetings at the Group of 20 summit in Osaka, Japan.

“I saw that tweet and it felt like you’ve sent a flower of hope for the Korean peninsula,” South Korean president Moon Jae-in told Mr Trump on Sunday.

“If you shake hands with Chairman Kim Jong Un at the Military Demarcation Line, it would be historic, just by the picture of it. Not only for the denuclearisation of the Korean Peninsula, but also for a permanent peace in the region, it’ll be very meaningful.”

Pope Francis on Sunday praised the meeting between the two leaders and said he hoped it would lead to peace.

“In the last few hours we saw in Korea a good example of the culture of encounter. I salute the protagonists, with a prayer that such a significant gesture will be a further step on the road to peace, not only on that peninsula, but for the good of the entire world,” he said at his weekly address in St. Peter’s Square.

Mr Trump and Mr Kim have maintained friendly relations despite failing to agree on a path forward on a deal that would ease sanctions in return for steps toward eliminating North Korea’s nuclear threat.

Mr Moon said on Sunday that if Mr Kim were to “sincerely, completely” dismantle Yongbyon, the international community would be able to discuss easing sanctions. “It’ll be the starting point for an irreversible denuclearisation,” he said.

“A lot’s been done,” he said, citing Mr Kim’s restraint from testing nuclear weapons and long-range ballistic missiles since talks began between the countries. “President Obama wanted to meet and Chairman Kim would not meet him. They were begging for meetings constantly.”

Throughout meetings on Sunday morning, Mr Trump and Mr Moon both appeared unsure about whether Mr Kim would appear.

The US president repeatedly cautioned that the logistics were complicated, and he said that any meeting would be little more than a photo op.

“Chairman Kim wants to do it,” he said. “A handshake means a lot,” he added.

Mr Trump had arrived in Seoul late on Saturday for talks with Mr Moon after attending a Group of 20 summit in Osaka, Japan, during which he made a surprise, spur-of-the-moment offer to meet Mr Kim.

Critics have called the DMZ meeting a publicity stunt and said Mr Trump wasted an important symbolic move when there has been little sign that North Korea has taken meaningful steps toward denuclearisation.

A number of Democrats vying to replace Mr Trump in the White House said there was nothing wrong with talking to US adversaries, including Mr Kim. This round of talks however, they said, should have followed intense preparations and substantive progress by North Korea on the nuclear issue.

“Our President shouldn’t be squandering American influence on photo ops and exchanging love letters with a ruthless dictator,” US senator Elizabeth Warren said in a Twitter post.

Her 2020 rival and US Senate colleague Bernie Sanders did not fault Mr Trump for meeting with Mr Kim.

“But I don’t want it simply to be a photo opportunity, the whole world’s media was attracted there,” Mr Sanders said. “What’s going to happen tomorrow and the next day?”

Mr Trump has weakened the State Department at a time when Washington needs to move forward diplomatically toward peace, Mr Sanders said.

‘Nothing to show for it’

Mr Trump has raised the profile of a dictator by meeting with Mr Kim three times now with nothing to show for it, according to Julian Castro, US housing secretary under President Barack Obama.

North Korea had not lived up to commitments made in previous summits with Mr Trump, and intense preparations should be have been made before the leaders met again to ensure progress, they said. “He’s doing it backward,” Castro said.

A spokesman for former vice-president Joe Biden said Trump was “coddling” dictators at the expense of US national security.

North Korea had launched missiles into the sea just last month, Senator Amy Klobuchar noted, showing the need for the US to go into such talks armed with a clear mission and clear goals.

“It is not as easy as just going and bringing a hot dish over the fence to the dictator next door,” she said. – Agencies